Naam Shabana movie review: Taapsee Pannu and Akshay Kumar get a thumbs up from critics

If reviews are your thing, here's what critics are saying about Naam Shabana 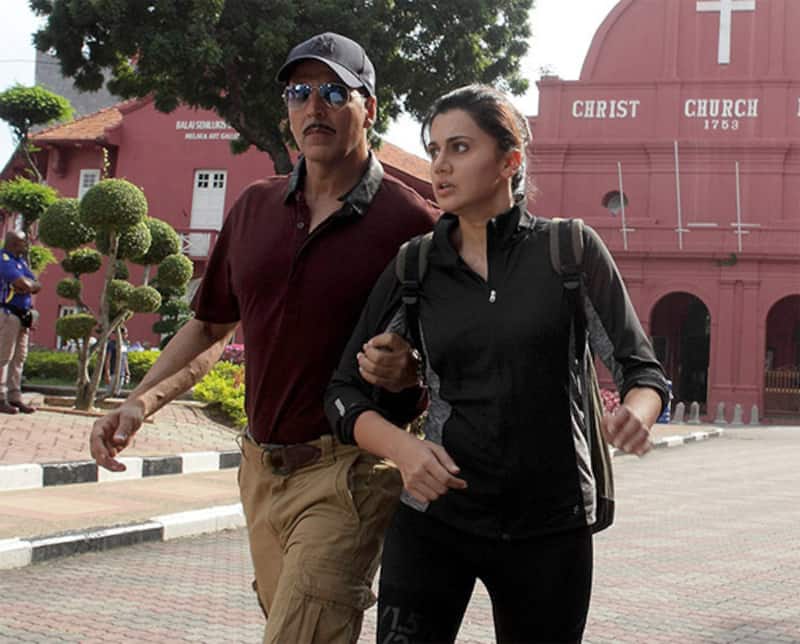 Naam Shabana releases tomorrow but we got to watch it a few days before release. There were many hopes from the film, considering it is a spin-off of Baby and also has a woman doing all the stunt talk despite having Akshay Kumar in it. However, it left many critics pretty disheartened. Bollywoodlife's film critic Sreeju Sudhakaran gave it a 2 and a half stars saying, "Naam Shabana is like two movies rolled into one. While the first half shows how Shabana gets into the secret service program, the second half focuses on the mission in Malaysia. This could not have been a bad thing if the second half hadn’t completely alienated the events of the first half, and even ignoring to some extent, Shabana herself. Akshay Kumar, who was supposed to be just a cameo, gets to do a lot more than ‘bahut door se aaya hoon, kuch toh karne do.’ In fact, his presence actually overstays its welcome, distracting the audience from the actual protagonist." Guess the director got a little carried away to have a superstar in his film. (Read the full review here) Also Read - Taapsee Pannu to Kareena Kapoor Khan; celebs who insulted the paparazzi and indulged in heated arguments with them

The Quint in its 2.5 stars review said, "When Pannu is sent all the way to foreign land to interrogate a woman, she asks Akshay Kumar’s character why he couldn’t do it himself. He says, “Kya main aapko zabardasti kerta achha lagta?” For a film that claims to chart a new course on gender equality it surely knows how to preserve stereotypes! At one point, right after making mincemeat of criminals, she suddenly freezes and must be rescued by Akshay Kumar, who drags her confused self out of ground zero. This makes all her “toughness” seem more robotic than organic. It’s just very odd. As is her instant parlour-curled hair right after vigorous combat. Like really?" Also Read - Dunki: Taapsee Pannu on pictures from the sets being leaked; REVEALS Shah Rukh Khan, Rajkumar Hirani’s shocking reaction

Indian Express' reviewer liked the film but there are conditions applied. Finding it worthy of just 1.5 stars, the reviewer writes, "What’s not to like about a film which toplines a girl who kicks serious butt? Given producer and writer Neeraj Pandey’s record of ratcheting up the patriotic quotient, it comes as no surprise that Naam Shabana’s leading lady does it for her country. What does come as a surprise, however, is just how much of a drag the film is. Except for a few stray sequences in which the limber Taapsee Pannu goes after the bad guys, and the ones in which co-star Akshay Kumar moves in to demonstrate how the big boys do it, there is nothing either novel or interesting about the film." Also Read - Trending Entertainment News Today: Shehnaaz Gill breaks silence on sudden exit from Salman Khan's film; Taapsee Pannu's scuffle with paparazzi and more

TOI gave it 3 stars but pointed one glaring flaw that the filmmakers have missed here, "Most critics who saw Neeraj Pandey’s action-drama, Baby (2015) praised agent, Shabana’s cameo in it... Taking the praise to their heart, this time around, the makers dedicated 148 mins, (really?) to the spunky agent. Sorry, but the running time is the film’s first inherent flaw. Frankly, Shabana shone in Baby because she was in a cameo. Someone missed the point, guys."

Now you decide whether or not, you want to watch the film.