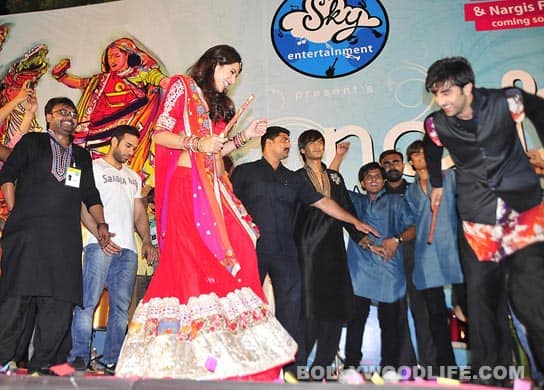 While it seems like a promotional strategy gone wrong, the fans of Ranbir Kapoor and Nargis Fakhri in Ahmedabad weren’t complaining

The Rockstar actor and his co-star Nargis Fakhri in Imtiaz Ali's upcoming flick rocked Ahmedabad as the duo promoted the film at ‘dandiya’ venues across the city. Rockstar is touted to be one of the biggest releases of the year as the film boasts of a tight story, rocking music by the Mozart of Madras and the works. Ranbir Kapoor, who plays the role of a rock star in the film, truly played to his character and made the audience at Ahmedabad go wild as he, along with Nargis, participated in garba celebrations, being held on the occasion of the ongoing Navratri festival. This was Nargis' first major public appearance and she looked stunning, dressed in a beautiful traditional ghaghra-choli for the event. Both the stars made a dramatic entry on a hydraulic crane amidst a thunderous applause. They even greeted the crowds in Gujarati and performed some garba and dandiya moves on stage! Nargis was later heard telling her friends: “I had such a lovely time. I felt like a princess. Can I just wear this every day?” It might have been fun for everyone involved but we aren’t totally sure about how many people from the garba-celebrating audience will actually be interested in a film on rock and roll! Also Read - From Sonam Kapoor to Sobhita Dhulipala: Bollywood stars who hit headlines for showing middle finger in public