Kangana Ranaut has not shied away from taking potshots from all and sundry. The latest target seems to be Priyanka Chopra. The lady was reacting to a news item from a news channel that was reacting to a reported opening for the position of a journalist in the New York Times. Kangana Ranaut said that no one seems to acknowledge India's diversity or religious tolerance. She said that people only want to talk shit and are even paid for it. While the news report is kind of debatable, what is shocking is how she has dragged Priyanka Chopra in the matter. Also Read - BTS: 4 different outfits of Jimin that you might want in your wardrobe – view pics

Kangana Ranaut wrote, "But this not just in journalism, it's in every field, the way @priyankachopra has gone from being a nationalist to a secular pupply, from being Modi ji's biggest fan to his passionate critic and hater is evident...Basically roti keliye duniya nachati hai...apne desh mein freedom toh hai...jo karna hai karo." Just check out the screenshot of what she shared on her social media handle. Also Read - It's Expensive: Priyanka Chopra's sheer lace cocktail dress can buy you 15 tickets to the Maldives 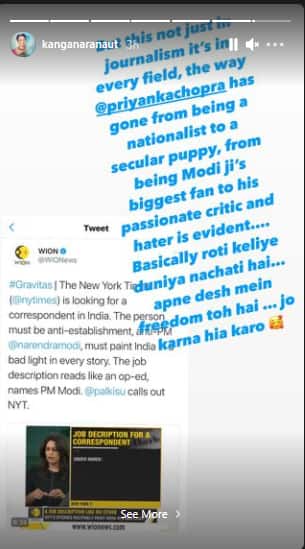 Also Read - Arjan Bajwa opens up on the backlash against Kabir Singh: 'If there was something wrong with the film, it would not have made more than 250 crore' [Exclusive]

We don't know what to make for this. It is highly unexpected of a huge reputed publication if the thing is true. Kangana Ranaut has just reached abroad for the shoot of Dhakkad. The actress managed to get her travel approved and has reached the location. It is a spy thriller with Arjun Rampal as her nemesis. Priyanka Chopra has been shuttling between New York and London for her work commitments. The two worked together in Madhur Bhandarkar's Fashion and delivered knock performances.