Neha Dhupia and Angad Bedi are celebrating their first marriage anniversary at a plush resort in Mauritius. The couple tied the knot last year on May 10 and are parents to Mehr

Last year, Neha Dhupia and Angad Bedi took us by surprise when they married in a rather hush-hush manner. Everyone got a shock when the pictures started circulating on social media. It seems no one except Karan Johar knew that she was getting hitched. In fact, some were even unaware that Angad Bedi was dating her. The pregnancy rumours began doing the rounds and finally, the couple confirmed that Neha Dhupia was indeed expecting in November. Well, the two are proud parents to Mehr who is around six months now. The couple have headed to Mauritius to ring in their first marriage. Neha posted a picture of hers chilling by the pool. We could see Mehr's stroller close by. The couple are in the Dinarobin Beachcomber Resort, which is known as a haven of peace and tranquillity. It is on the La Morne Peninsula. Neha posted a pic and people commented on how she is looking.

Angad Bedi also put up a pic saying that it was just two days to his first marriage anniversary. He has spoken in the past how Neha's parents scolded him when they found out that she was pregnant. He said that he somehow had to be a man and tell them what happened. Over time, he won them over and is loved by all. Also Read - Angad Bedi and Neha Dhupia complete three years of married life; let us rewind to some of their beautiful clicks 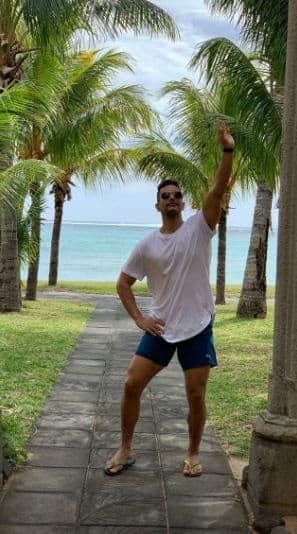 It seems Angad first saw Neha when he was playing for the Delhi U-19. He was quite impressed by her running technique. She was preparing for the Miss India contest. He told Bombay Times, "When I used to play Under-19 cricket in Delhi, during a gym session, I spotted this girl in really tiny shorts. I was impressed with her running technique. I figured out that her name was Neha Dhupia and that she was preparing for the Miss India pageant." It seems he had proposed to her four years back but she maintained a 'just friends' stance. However, he was sure he wanted to marry Neha. She told the paper, "He said, ‘I don’t want to be just in a relationship with you. Either you are my wife or nothing’. I always believe in one thing — the right time and place. In the past four years, I have seen a huge change in him. He has matured a lot. In the end, everything else goes flying out of the window and friendship is all that matters. I can promise you that we aren’t going be a couple who will post a lot about ourselves on social media." Stay tuned to BL for more scoops and updates!