Not Disha Patani but 'Woh' is Tiger Shroff's favourite co-star - find out!

took to Instagram to share it with the world in an AMA session. Kind of, actually as he replied with -I like 'Woh'. And while we were playing the guessing game, it was but clear that rumoured girlfirend Disha Patani is not his favourite co-star! Find it out here!

We have played the 'Tiger Shroff and Disha Patani might/might not be dating' game often but nothing takes away from the fact that they make a stunning couple. They are often spotted on dinner and lunch dates and honestly, the pictures do all the talking. Be it the way Tiger leads the way for her or twins with her at times for the shutterbugs, their rumoured romance is better than a lot of Insta-official ones in the industry. So much that, rumours of them tying the knot have been going around. However, and you'd be surprised, Disha Patani is not Tiger Shroff's favourite co-actor.

How do we know that? Well, he took to Instagram to share it with the world in an AMA session. Kind of, actually as he replied with -I like 'Woh'. And while we were playing the guessing game, Ananya Panday who will soon be seen in Pati Patni Aur Woh, took to Insta to reshare it and wrote back, "Major missing happening." Also Read - WHAT! Salman Khan has a SECRET wife Noor and a 17-year-old daughter in Dubai? The Tiger 3 star reacts 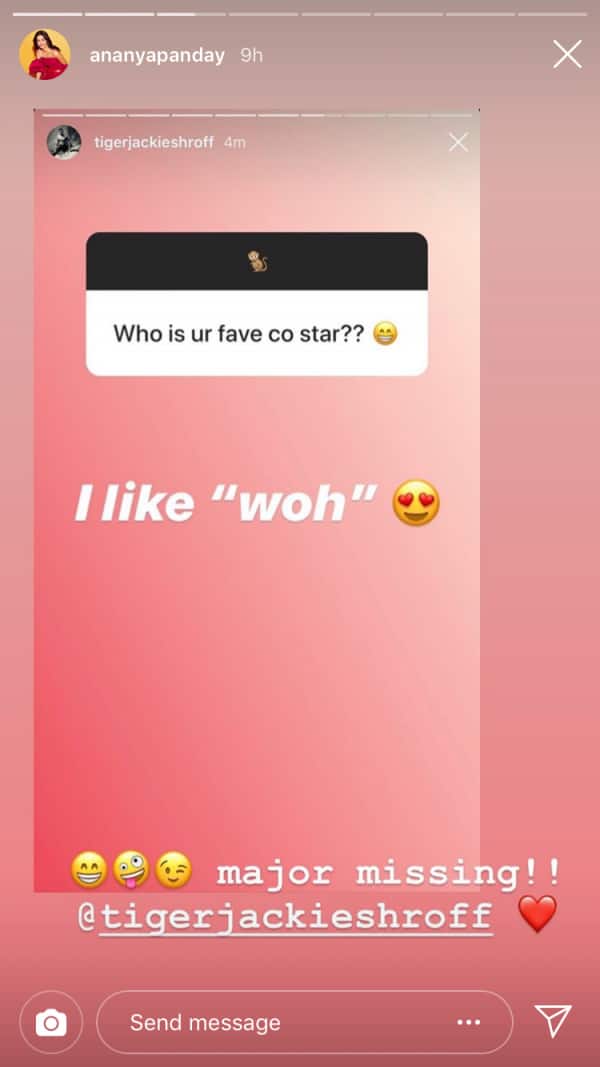 Earlier, in the AMA, one of the users asked, "Are you dating Disha?". To which, Tiger gave a quirky reply and wrote, "Meri Aukaat Nahi Hai Bhai." LOL, right?

Meanwhile, the actor is currently gearing up for the promotion of his upcoming mega-budget venture War, which also stars Hrithik Roshan and Vaani Kapoor in key roles. Expected to be one of the most expensive projects of YRF, the film is shot in six countries across the world and will show some daredevil stunts, which will be a huge treat for the fans of both the stars. Tiger Shroff will also kickstart the shooting of Ahmed Khan's Baaghi 3 soon, which also stars Shraddha Kapoor and Riteish Deshmukh in key roles. It is set to hit the screens in 2020.

On the other hand, Ananya is busy shooting for Pati Patni Aur Woh. Directed by Mudassar Aziz, she will be seen playing 'woh' to 'pati' Kartik Aaryan and 'patni' Bhumi Pednerkar. The movie is a remake of 1978 film with the same name. The original film featured Sanjeev Kapoor, Vidya Sinha and Ranjeeta Kaur in the leads and needless to say, we can't wait to see the newest rendition of it. Stay tuned to BL for more updates and scoops!