A few days back, we conducted a poll on who would make a dream real-life couple amongst all the rumoured new pairs in the industry. Well, it was nothing serious just a fun poll after hearing so many rumours about the dating lives of Sidharth Malhotra, Kartik Aaryan, Sushant Singh Rajput, Sara Ali Khan and Ananya Panday. In case you missed it, then dating rumours between Kartik Aaryan and the Student Of The Year 2 actress surfaced after they were spotted on a dinner date. They are working together in Pati Patni Aur Woh remake. On the other hand, almost the whole of Sara Ali Khan and Kartik Aaryan's fandom wants the two to go on that dream coffee date.

However, some rumours are surfacing that Kedarnath actor Sushant Singh Rajput and Sara Ali Khan's friendship is blossoming by the day. The two became very good friends after the film and have an immense amount of respect for each other. Well, it looks like their mutual admiration and respect has impressed fans who want SSR and Sara to date in real life as well. When people had questioned Sushant on his leading lady getting all the attention, he said she totally deserves it. She was also very generous in her praise for him. She said, "I have no idea how I have done Kedarnath. I have tried my best but I feel I couldn't have done any of it without Sushant. He has just been the most helpful person I have had. There were days when I was lost and scared as it's the first time I am facing the camera but he has been hands on. Sushant also helped me improve my Hindi and whatever little I speak, he has taught me. He has helped me a lot." Also Read - Trending Entertainment News Today: Raveena Tandon REVEALS being replaced by hero's insecure girlfriend; Saiee Manjrekar DATING big shot producer's son and more

Like the shadow I am and I am not... Jalaluddin Rumi मंसूर-मुक्कु और केदारनाथ ?❤️?? #kedarnath

The percentage of people who wanted them to be together was slightly higher than those who ship Kartik Aaryan and Sara. On the third place was Tara Sutaria and Sidharth Malhotra. The newbie confessed that she had a crush on Sid and would like to have coffee with him. Also Read - Vicky Kaushal and Sara Ali Khan look deep in love in first look of their untitled next – see pic 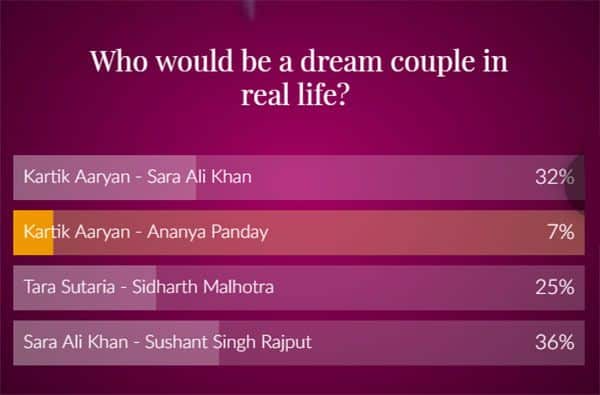