Not only Dhanush, Gautami, Prakash Raj, have walked out of interview as well - watch videos

These angry celebs have walked out of interviews too. 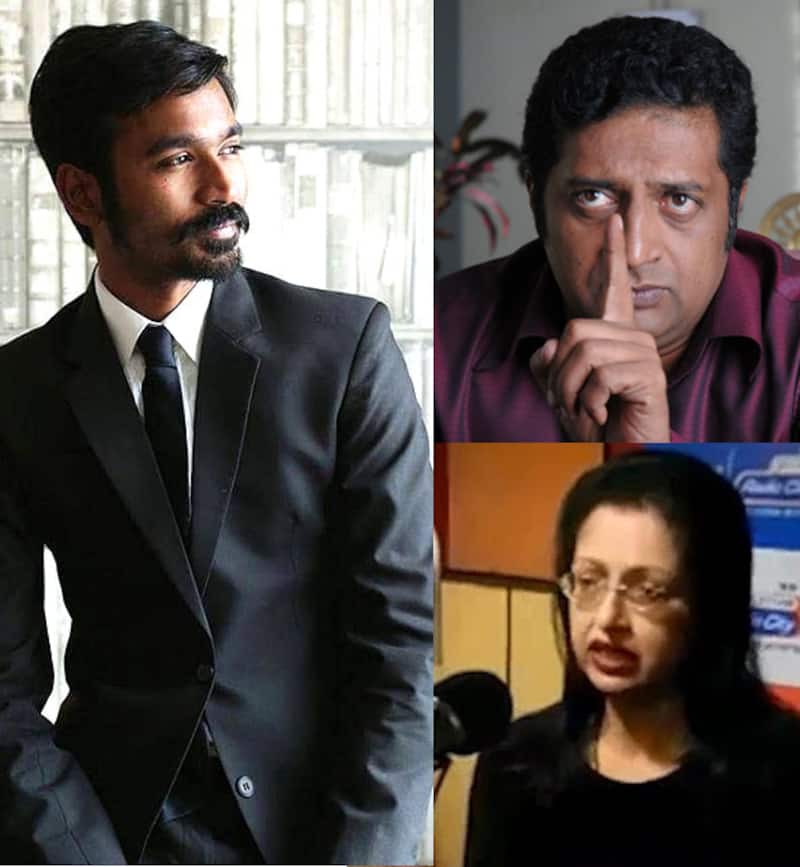 Two days ago, Dhanush was interviewed by a reporter from Telugu channel TV9 as part of promotions for VIP2. The interview took an awry turn when she broached the controversial subject of Suchi leaks. She went on to ask him about the alleged mental agony he had to go through. The actor shot back saying" Who said I had to go through mental agony." Things only got more heated when he was asked if his family life was at stake. He then stood up, took off his mike, declared it a stupid interview and walked out! While speaking with Mid-day he went on to admit that it was sill of him to snap. His strong reatcion was unwarranted he felt. He was very clear that he didn't want to answer personal questions. Also Read: Dhanush says the walk out from the interview was SILLY Also Read - The Gray Man: Will Chris Evans join Ryan Gosling and Dhanush in Russo Brothers' sequel? Here's what we know [Exclusive]

Prakash Raj: In a 2016 interview, Prakash Raj reportedly was interviewed by Kannada channel, Janasri News for his Kannada film - Idolle Ramayana. At that time, the Cauvery dispute was a heated topic of discussion. Kepeing the topic in mind, the anchor in question decided to ask - "What do you think of the Cauvery issue. Is the Supreme Court right or wrong? You think there will be a solution and who is being a hindrance- Tamil Nadu or Karnataka?” Prakash Raj in response to the question blasted the anchor: "Actor, director, producer Prakash Raj is here to talk about films and not about governance. This issue is a very important, deep and sensitive topic and not just something that is affecting the farmers. A person answering such questions must talk with a sense of responsibility. Please do not ask me questions like these during an interview for my film." Post which, he walked out of the interview. Also Read - Trending Hollywood News Today: Dhanush joins Ryan Gosling in The Gray Man sequel, Alec Bladwin brutally trolled and more

Gautami: Gautami walked out of a radio interview this year when she was asked whether she had brought up the issue of Jayalalitha's allegedly controversial death for publicity. She was reportedly asked the reason for her split with Kamal Haasan. Also Read - The Gray Man: Dhanush to join Ryan Gosling in Russo Brothers' sequel; here's what The Lone Wolf will be doing this time

John Abraham: As part of the promotions for Force 2, the actor had appeared on Krushna Abhishek's Comedy Nights Bachao Taaza along with co-star Sonakshi Sinha. Krushna reportedly made fun of John's previous films and poked fun at his acting skills. The actor did not take it too well. The upset actor went on to leave the show mid-way.

Robert Downey Jr - Two year ago, while promoting Iron Man 3, Robert Downey was asked about something he had said in a 2008 interview. He already wasn't too pleased with the little-too personal question but the interview took a turn for the worse when he was asked about his his relationship with his father and his drug abuse history. Thta's when the actor go up and walked out of the interview. In a later ineraction, the actor revealed that he wished he had walked out sooner.

Tanishta Chetterjee - On Krushna Abhishek's Comedy Nights Bachao Taaza, Tanishtha Chaterjee, one fo the stars of Parched had come on show to promote the film. AS the show followed a roast format, they were poking fun at her. Things went downhill when they decided to mock her complexion. They went on to call her Kaali Kalooti (Black crow) and even asked if she ate Kaala Jamuns. Furious, the actress left the show. The crew reportedly did not understand why she was storming out. Eventually they gave in but insisted that she shoot her exit shot.