Alia Bhatt and Sidharth Malhotra seem to be going really strong in their relationship....

Look closely at the back..

Indeed, none can escape the prying eyes of the media. I mean, just look at the above picture and you will know what we are trying to say. It's coming from Jitesh Pillai's starry birthday bash which has held recently. While the actual intention was to capture Jitesh and Anushka Sharma in one frame. The curious ones' happened to notice a rather interesting sight of Alia Bhatt and Sidharth Malhotra cosying up at the back. Here take a look! Alia's dress is a give away... Also Read - From Vijay Deverakonda to Rashmika Mandanna: THESE South biggies are set to amaze the B-Town audience with their Bollywood debuts 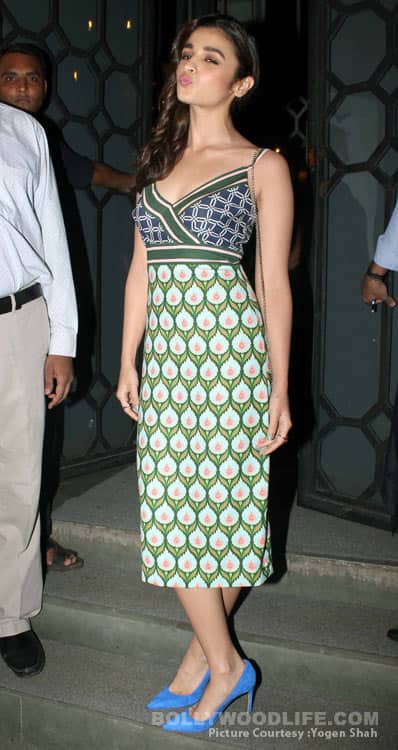 Also, Sid was wearing blue that day Also Read - Rhea Chakraborty, Alia Bhatt, Disha Parmar and more celebs from Bollywood and Television industry were trolled this week – find out why

Probably, Alia and Sid were just standing close to each other or whispering into each other's ears. But one look at the pic and you are bound to get 1o different thoughts in your head. Were they hugging? Were they kissing? Were they close dancing together? Well, we really dunno what were they up to but this one picture is enough to confirm the two are very much together, very much in love.

Also read: The real reason why Alia Bhatt will never open up about Sidharth Malhotra

However, having said that, now don't get excited to hear an official confirmation about their relationship anytime soon. Coz Alia had recently issued an explosive statement saying, "In India, you are a part of a society that’s very judgmental. Here, girls who have multiple boyfriends is still a huge deal and something that is frowned upon. I mean, look at Taylor Swift. She’s dated, like, everybody. But if she was here, she’d be totally shamed for making those choices. Her image and appeal would be very different. The reason actresses don’t talk about their private lives is because in our society there is a lot of slut-shaming. Eventually, I have a responsibility and I have to protect myself. It’s important that I am seen in a certain way, it’s just the way it is. Speculations about celebrities are commonplace but as long as it’s not coming from the horse’s mouth, you’re quite safe, so to speak."

What do you have to say about Sid and Alia's intimate pic? Drop your thoughts in the comments below and we'll be back with more updates right here.