Orlando Bloom caught naked in a beach with his popstar girlfriend Katy Perry! Check out the censored pics.

Even with the censor bar, the pic has revealed a lot more than what we can imagine! Check it out

Orlando Bloom and Katy Perry's romance has been quite the talk of the town. The actor and his popstar girlfriend have been going out for a while now and things sure seem pretty serious between these two. So much that they even recently went on a not so secret rendezvous. The duo were spotted by foreign media having a gala time in an Italian beach. Everything about it is cute. Except for the time when Bloom decided to let his "man" go free as he got off his swimming trunks to take a dip in the ocean! That did happen. Well, after taking a nice dip in the bright blue ocean, the Pirates of the Caribbean star did a little rowing with his bikini clad girlfriend as well! Also Read - Trending Hollywood News Today: BTS' V reveals why he stopped cooking, Camila Cabello and Idina Menzel's Cindrella teaser gets internet talking and more 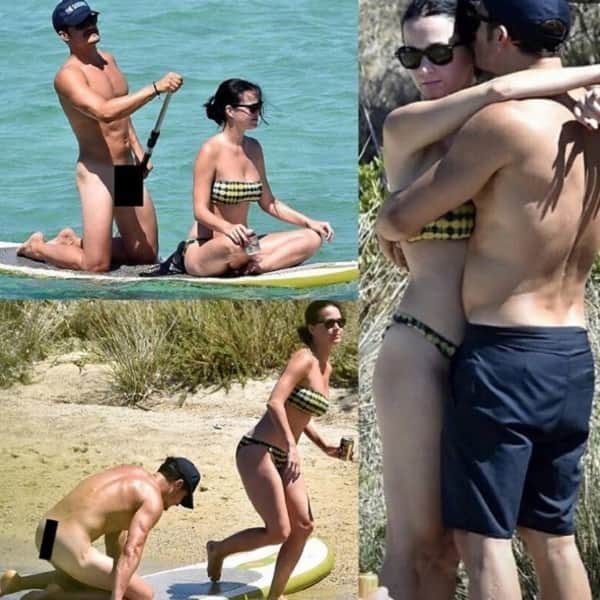 However, thanks to his junk on display, and with some paps around, he was instantly clicked! Now it is quite obvious that one would rather take a look at the uncensored version of Orlando in full bloom (geddit?). But sadly all we get to see is his manhood censored with a black bar on it. Ever since the pics broke out, Twitter has gone berserk as everybody is frantically looking for the uncensored version of this pic. Why wouldn't you? Even with the bar hiding away his junk, you can easily see a lot more through it's shadow that falls on his thigh. Time to scroll up and look at the pic again, I guess? Also Read - Trending Hollywood News Today: Kim Kardashian's poop-themed party for North, BTS creates new record and more

The pic made us go ROFL as very rarely do you see actors show off way more than their abs, right? In fact, the sole boldness of Orlando to bare it all shows that his plonker is just as hot as his bod! He was later also spotted making out with Katy after getting off their paddling spree. Bloom and Perry were first linked in January when news of them flirting each other at the Golden Globe after party surfaced. They seem so much in love that you'll run of words to describe them!


Are you frantically looking out for Bloom's manhood on the internet too? What are your thoughts on this? Tell us your thoughts in the comments section below and stay tuned to this space for more gossips and latest updates! Stay tuned to BollywoodLife for the latest scoops and updates from Bollywood, Hollywood, South, TV and Web-Series.
Click to join us on Facebook, Twitter, Youtube and Instagram.
Also follow us on Facebook Messenger for latest updates.
Advertisement