Oscars 2016: Leonardo DiCaprio's winning speech 'I DO NOT TAKE TONIGHT FOR GRANTED!'

Leonardo DiCaprio's hilarious leaked Oscar speech was entertaining, but when the actor won The Academy Award for Best Actor he was intense. Yes, after six nominations DiCaprio bagged an Oscar for The Revenant which he values a lot! 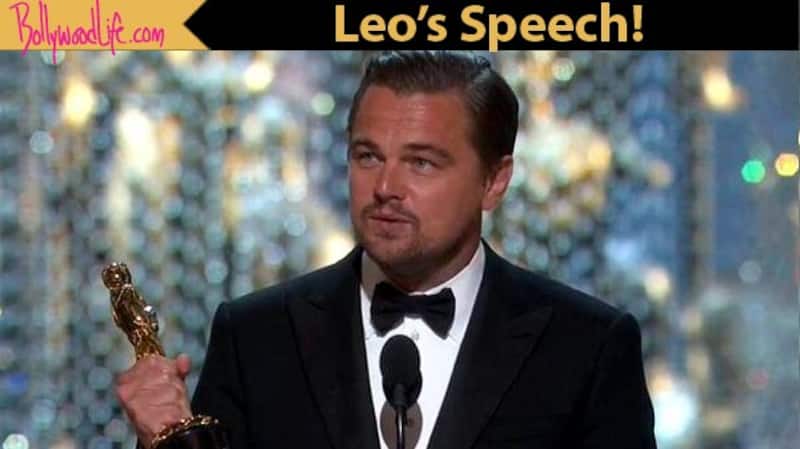 The man made it very clear that this moment was indeed special...

Leonardo DiCaprio made it finally! DiCaprio won The Academy Award for the Best Actor Award for The Revenant. Clearly everybody even at the event was thrilled that the six time nominee had finally bagged an Oscar. Everyone rejoiced and his bestie Kate Winslet was seen celebrating her buddy's win with tears of joy rolling down her eyes. The actor in his winning speech made it loud and clear that he values this win a lot. Here's what Leonardo DiCaprio had to say after winning the Oscar... Also Read - Cannes 2022: Netizens call Urvashi Rautela a 'liar' for claiming Leonardo DiCaprio praised her as a talented actress

"Thank you! Thank you all so very much. Thank you to the Academy, than you to all in this room, I've to congratulate the other incredible nominees this year for their unbelievable performances. The Revenant was a product of the tireless efforts of an unbelievable cast and crew I got to work alongside. First off to my brother in this endeavour Tom Hardy." The actor then went on to talk about his friendship with tom and The Revenant director, Alejandro González Iñárritu. He also thanked Martin Scorsese for teaching him about cinema and his parents and friends. Also Read - Cannes 2022: Urvashi Rautela says Leonardo DiCaprio complimented her, 'I was waking up pinching myself'

He then continued... Also Read - BTS: V aka Kim Taehyung gets compared to Leonardo DiCaprio’s Jack from Titanic as video of him dancing at a jazz club goes viral

"Making The Revenant was about man's relationship with the natural world. A world that we collectively felt in the 2015, as the hottest year recorded in the history. Our production needed to move to the southern tip of this planet just to find snow. Climate change is real. It’s happening right now. It is the most urgent threat affecting our entire species. And we need to work collectively together and stop procrastinating. We need to support leaders around the world… Who do not speak for the big corporations, but who speak for all of humanity, for the indigenous people of the world, for the billions and billions of underprivileged people who are most affected by this, for our children's children and for those people out there whose voices have been drowned down by the politics of greed."

And yes then came Leonardo DiCaprio's final words, "I thank you all for this amazing award tonight. Let us not take this planet for granted. I do not take tonight for granted, thank you o much!"

Ahead of the Oscars fans of the actor has leaked a fan made speech, which was a combination of the actor's lines from his different movies. Of course with all the buzz surrounding DiCaprio's win, this speech went viral and unlike Leo's intense speech on the stage, this one was super hilarious.