Oscars 2017: Damien Chazelle for La La Land or Mel Gibson for Hacksaw Ridge - who should win Academy Award for the Best Director?

Director is often called as the captain of the ship, and rightfully so, because without his leadership and direction, the entire production has the probability to sink. This year, at the Oscars 2017, we have some deserving talents fighting to take the statuette for the Best Director. There is the actor-director Mel Gibson, who has redeemed himself in the eyes of his jury (post his anti-Semitic rants) with a fine work in Hacksaw Ridge. Damien Chazelle shows Hollywood and the rest of the world how to make an entertaining and engaging musical, that doesn't need to have ABBA songs. Two films old Barry Jenkins makes a haunting portrayal of a gay African-American in nearly brilliant Moonlight. Kenneth Lonergan's tale of depression and death in Manchester By The Sea may be off-putting to some, but it has some really nice moments. And there is Denis Villeneuve, darling boy of critics, whose sci fi drama is getting the same love as his previous movies. Also Read - Oscars 2017: Damien Chazelle becomes the youngest person to win Best Director award

Some of the notable snubs in this category are Clint Eastwood (Sully), Martin Scorsese (Silence), Mira Nair (Queen of Katwe). But then since you can only accommodate only 5 talents here, some one has to lose out on. Well, let's look at each nominee in this category individually, and who, we feel, will emerge the winner... Also Read - Damien Chazelle's reaction on bagging 14 nominations at Oscars for La La Land is very predictable 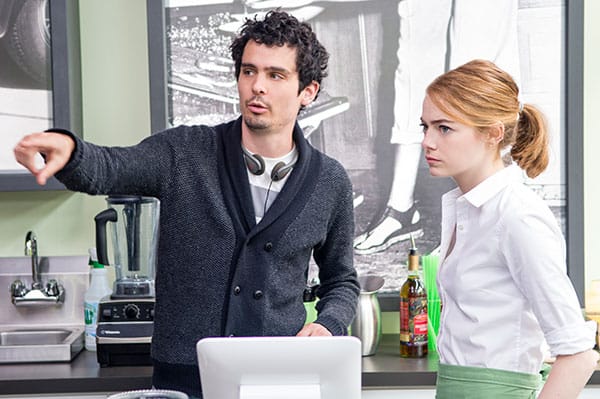 Making musicals is something of a tricky proposition - if not done well, you will end with a kitschy movie like Mamma Mia! But Damien Chazelle follows up on his terrific work in Whiplash with a music romantic drama that is high on the notes as well as on the emotions. The first choreographed musical performance is enough to give him a higher bidding on the list.

Barring for an average third act, Moonlight for most of its parts is an arresting coming of age drama, replete with some terrific performances. And Barry Jenkins, who has just directed one feature film before, has done a fantastic job at adapting a critically acclaimed play on screen.

It may be slow and sometimes goes to much for the metaphors, but Arrival is a fulfilling movies, with some really good special effects for its budget. Though movies on aliens are nothing new for Hollywood, Denis Villeneuve (Prisoners, Sicario) deserves a pat on the back on giving them a deeper significance to the plot rather than the 'aliens are attacking' way.

Kenneth Lonergan – Manchester by the Sea

Manchester by the Sea may be seen as a movie about loneliness, melancholy, guilt and death, but director Kenneth Lonergan makes sure Manchester by the Sea doesn't depress the hell out of you. He extracts admirable performances from the entire cast, but the cinch for me is that terrific scene when Casey Affleck's character has an emotional confrontation with his ex-wife.

If Mel Gibson, a man who has been pointedly ignored by the jury for his past anti-Semitic statements, finds himself in the Best Director category, there is something brilliant he has done with his latest movie, Hacksaw Ridge. Perhaps not as superb as Saving Private Ryan, Hacksaw Ridge is still a riveting watch for being a different take on war movies, where the lead actor doesn't pick up arms to fight the enemies, instead goes on to save his injured comrades. Only if has reigned in those combat scenes and made them more believable...

Going by the above choices, this is what we feel about who deserves to win the award and who will....

Who should win: Denis Villeneuve – Arrival