The big day has finally come with the 90th Academy Awards. The biggest celebs of the town right from Matthew McConaughey to Meryl Streep graced the event with their presence. While the red carpet started off the event aesthetically, we are expecting a rocking main event, so let's wait and watch... Also Read - Oscar-winner Bhanu Athaiya to be honoured with Laadli Lifetime Achievement Award

So the first award of Oscars has been announced in the form of Best Supporting actor. The prestigious award has been won by well-deserving Sam Rockwell for Three Billboards Outside Ebbing, Missouri. The actor arrived on the stage and thanked his co-stars and director Martin McDonagh, as well as "everyone's who's ever looked at a Billboard". 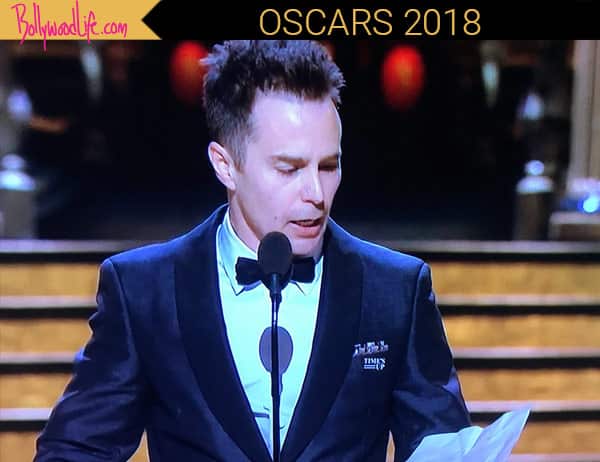 The second award has been bagged by Kazuhiro Tsuji, David Malinowski and Lucy Sibbick for transforming Gary Oldman authentically and beautifully into former president Winston Churchill.

Mark Bridges wins his second Oscars for best costume design for Paul Thomas Anderson's Phantom Thread. In his speech, he said, "My brilliant crew in London who worked tirelessly to make brilliant dresses and get them on camera".

Christopher Nolan's war drama Dunkirk wins two back to back awards in the categories of Sound Editing and Sound Mixing.

The Shape Of Water wins in the category of Best Production Design. “Keep dreaming up your monsters," Paul Denham Austerberry said, thanking director Guillermo Del Toro from the stage.

Allison Janney bagged her first Oscar with I, Tonya in the category of Best Supporting Actress.

The futuristic sci-fi drama Blade Runner 2049 wins in the category of Best VFX.

It's once again Dunkirk! The film bags best editing trophy.

The award for best documentary short subject goes to Heaven Is A Traffic Jam On The 405. The Silent Child wins Oscar in the category of Best Live action short film.

Filmmaker James Ivory bags best-adapted screenplay award for Call Me By Your Name, while the original screenplay was won by movie Get Out and was received by Jodan Peele.

Blade Runner is turning out to be a big winner at the event as it bags best cinematography trophy.

Alexandra Desplat won his second award for original score for The Shape of Water. Coco won again this time for the best song Remember Me.

Creative genius Guillermo del Toro won best award for achievement in direction for his masterpiece The Shape Of Water.

Gary Oldman was honoured with Best Actor award for his magnificent portrayal of Winston Churchill in Darkest Hour.

The fourth win of The Shape Of Water with the Best Picture. Director Guillermo del Toro gives an emotional speech to conclude the ceremony