Kartik Aaryan had recently posted a picture on his Instagram handle and asked his fans to guess who the special mehmaan on the sets of Pati Patni Aur Woh was. Look's like we are here for another Luka Chuppi as Kriti Sanon has come aboard for a special appearance in the remake.

Still guess who is Kartik Aaryan's 'special mehmaan' who visited the sets of Pati Patni Aur Woh? Well we are here to tell you. For the unversed, Kartik shared a picture of a new guest on the sets of Pati Patni Aur Woh and everyone was left wondering who could that 'special mehmaan' be. Kartik had posted a picture with a girl hiding behind the clapper board with a caption that read, "Aaj shoot karne ek special mehmaan aayi hain!! Guess who is here to play HideNSeek with #ChintuTyagi ?❤” Have a look at the picture here: Also Read - TOP 10 most gorgeous Bollywood divas who are natural beauties!

Well, many thought it would be Kartik's rumoured girlfriend, Sara Ali Khan while some thought it to be his co-star Ananya Panday. But the Student of the year 2 actress put the rumours to rest when she commented on Kartik's picture that she wasn't on the sets. Ananya wrote, "I wasn’t there on the set so u shot with someone else ?? dildaar #Pati hai aap."Have a look at Ananya's comment here: Also Read - Trending OTT News Today: Ananya Panday says she has the good qualities of Money Heist character Tokyo, Kota Factory 2 promo out and more 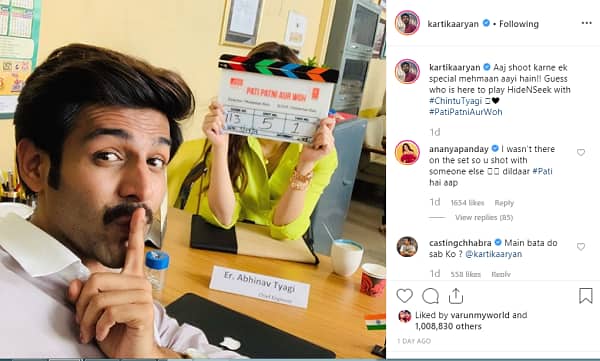 Without making you wait anymore, we would like to tell you that it's none other than his Luka Chuppi co-star Kriti Sanon. One of the hit pairings of 2019, Kartik Aaryan and Kriti Sanon will soon share the screen space together in Kartik's upcoming comic caper Pati Patni Aur Woh. Also Read - From Kangana Ranaut to Shah Rukh Khan: These 7 Bollywood actors are collaborating with South directors

Kartik Aaryan and Kriti Sanon were seen in one of the hist of 2019 Luka Chuppi and hence the caption read 'HideNSeek' so easy, right? Producer Juno Chopra is the man behind the whole thing. Juno had collaborated with Kriti in Bareilly Ki Barfi and the producer was keen to cast her in the film for a role. “Kriti and Juno share a great equation so when he approached her for a guest appearance in Pati Patni Aur Woh she readily agreed," a source told Mumbai Mirror.

As per the reports in Mumbai Mirror, Kriti's role will on the same lines as of Parveen Babi in the original classic. It was a busy schedule as Kriti shot in Lucknow for a day and headed to Mumbai again. Coming back to Pati Patni Aur Woh, the film is set to release by the end of the year. For more scoops and updates, stay tuned to BollywoodLife.