PETA CEO Poorva Joshipura issued an apology letter to Suriya for calling his pro-Jalikattu stand a promotional stunt for Singam 3.

The Jallikattu row had become pretty intense with celebs throwing their weight behind this ancient game. Suriya, Singam 3 actor, had also supported the game. In his bid to do so, he lashed out at PETA. The activist group definitely replied to the actor but chose a wrong way to do so. They claimed he is doing this for publicity of Singam 3. That made Suriya slap a legal notice on PETA and now we hear the organisation has tendered an apology to him. (Also read: Suriya's Singam 3 delay to be a boon for Vijay's Bairavaa) Also Read - Suriya, Vijay come out in support of Jalikattu, lash out at PETA

PETA CEO Poorva Joshipura issued an apology letter which said, "We received a copy of the legal notice sent to us through the law firm you engaged. If what you are now saying is correct, please consider this a wholehearted apology for implying that your public pro-Jallikattu comments might be related to the planned release of your upcoming film." She also added, "We support the promotion of a good film but not the promotion of cruelty to any living being, or spectacle that put animals or humans in harms way and we thought you would feel the same way." Joshipura also shared a video which shows animals being badly treated during the sport. She further wrote, "In Singam film, you are a honest, dutiful police officer. I hope the role of this character could help you appreciate why it is so important for us to ensure the Prevention of Cruelty to Animals Act 1960 is honoured and upheld." Check out the letter here. Also Read - Trisha Krishnan's mother files complaint after daughter's Twitter account gets hacked 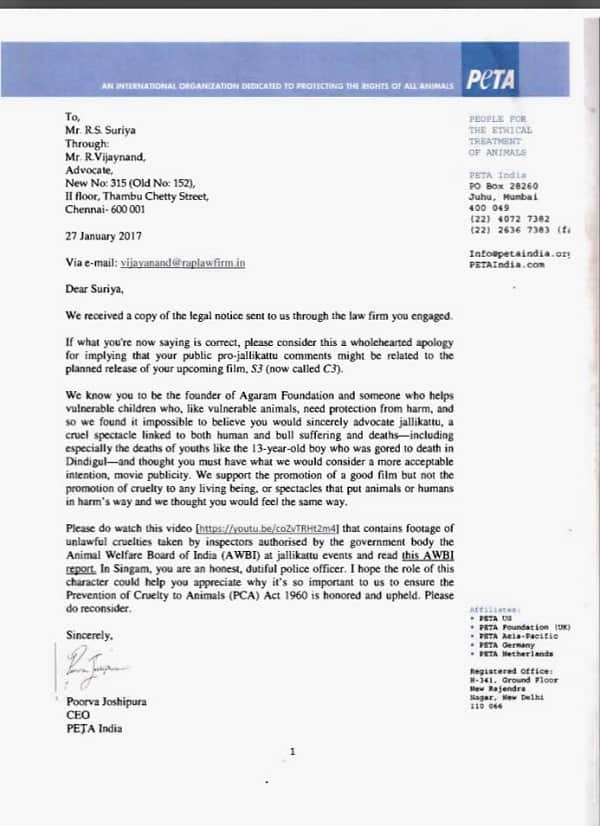 Suriya had said, "The group called PETA which won in the court of law by carrying out a campaign of lies that Jallikattu was inimical to bulls has lost in the people’s court. It is paradoxical to see those aiding extinction of native breeds talk about cruelty to bulls." The group obviously didn't take the reply lying down. Nikunj Sharma, Government affairs liason with PETA India hit back at Suriya with scathing reply, "It’s no coincidence that Suriya decided to speak only when his film S3 is about to release. During illegal Jallikattu events recently held, both bulls and humans have lost their lives. To use a cruel spectacle that routinely causes injuries and death and which has been condemned as illegal by the highest court in our country for movie publicity is in extremely poor taste."