PETA hits back at Suriya for supporting Jalikattu.

The whole of Tamil Nadu is fighting for one cause now - to lift the ban on Jalikattu. About 500 youngsters gathered on Marina Beach, Chennai on Tuesday night, and have stayed on without food and water for the past 2 days. They are silently yet passionately protesting with placards and posters. The Kollywood stars have also lent their voice to this cause as well. Simbu, Vijay, have all sent out a video message voicing their support for this Tamil sport. Suriya addressed a group of youngsters, encouraging them in their campaign against the ban. He also lashed out at PETA for aiding in the extinction of native breeds. "The group called PETA which won in the court of law by carrying out a campaign of lies that Jallikattu was inimical to bulls has lost in the people's court. It is paradoxical to see those aiding extinction of native breeds talk about cruelty to bulls," said Suriya. Protests by young volunteers is reflective of the common mood of the people of Tamil Nadu. These protests will bear fruit and Jallikattu will happen soon in Tamil Nadu, he said, adding, the people of the state should resist any move that would endanger "our heritage and identity."Words such as heritage, identity and history are generally being used by scholars but are now the buzzwords among youth due to Jallikattu issue. Thanks to all those who secured a ban on Jallikattu and prompted the youth to fight for a common cause."stated the actor further. Also read: Suriya, Vijay come out in support of Jalikattu, lash out at PETA Also Read - Oscars 2021: India's Bittu makes it to Live Action Short Film shortlist; Jallikattu fails to make the cut

And now Nikunj Sharma, Government affairs liason with PETA India has hit back at Suriya with scathing reply," It's no coincidence that Suriya decided to speak only when his film S3 is about to release. During illegal Jalikattu events recently held, both humans and bulls have lost their lives. To use a cruel spectacle that routinely causes injuries and death and which has been condemned as illegal by the highest court in our country for movie publicity is in extremely poor taste. Also Read - Oscars 2021: Malayalam film Jallikattu is India's official entry for 93rd Academy Awards 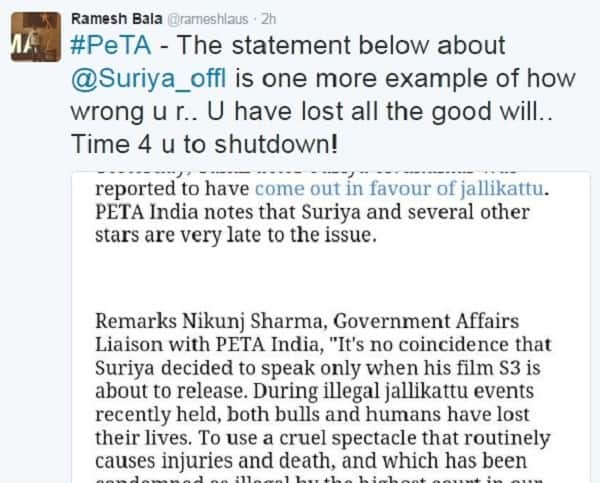 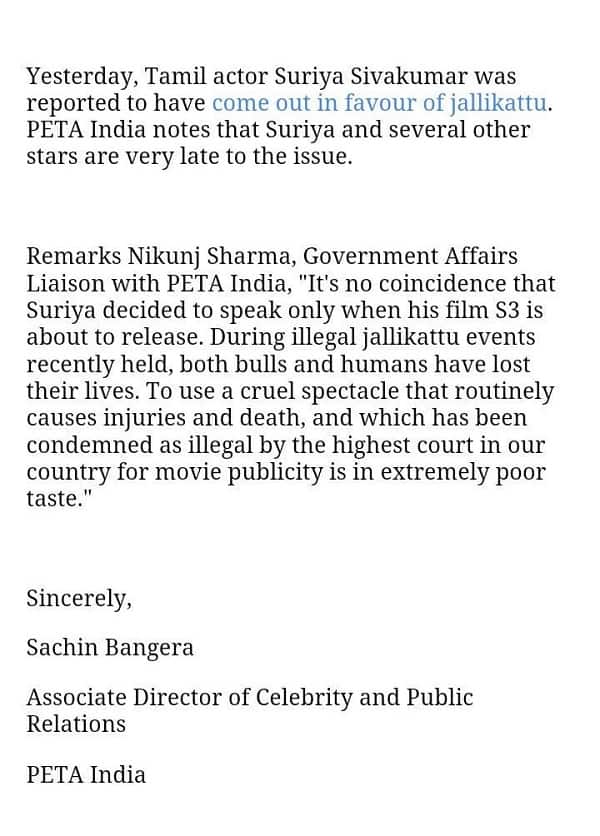 The protesters had stated, that they wouldn't move until the ban was lifted. As the agitators have been relentless in their demands, the government reportedly has informed the youth that they would approach the president seeking an ordinance on this matter.