While we shared pictures of the always adorable Taimur Ali Khan playing a game of football earlier today, we now have been blessed with yet another dose of adorableness thanks to Karan Johar. The filmmaker decided to make our weekends special by sharing a cute picture of his son, Yash. The producer-director has been busy as a bee, but he has always made sure to spend quality time with his family, especially his twins Yash and Roohi, and makes sure the world knows what cutoos they are! Also Read - Filmy Friday: When Shahid Kapoor confessed to feeling threatened by Ranveer Singh and Deepika Padukone

In a recent Instagram post the Dharma Production head shared, Yash was seen relishing a meal and making a mess of himself in the process. Sitting on his kiddy table, Yash was seen wearing a blue T-shirt sans Roohi in the shot. The star kid was seen holding a spoon and scooping out more food from the bowl kept in front of him while posing for the camera. The messy little baby boy’s face, hands and his table were smothered with food while he innocently dived in to get some more. The heart-melting expressions won us over! Also Read - WHAT! Aamir Khan was the videographer at Akshay Kumar-Twinkle Khanna's wedding? – view UNSEEN pics

Johar shared the picture with the caption: “Table manners!” adding a winking smiley to it. Also Read - Sara Ali Khan shares an unrecognisable throwback and reveals the one thing that hasn't changed! 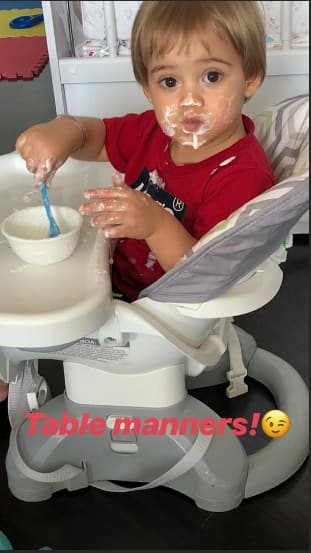 Apart from spending time with his family, Johar took time out to watch Manmarziyaan and shared his review. Taking to Twitter, Johar shared his thoughts on the movie complimenting the lead actors – Abhishek Bachchan, Vicky Kaushal and Taapsee Pannu – and director Anurag Kashyap for their roles in the movie.

ALSO READ: Ranveer Singh and Deepika Padukone to tie the knot in November? Karan Johar has the answer

The man woman dynamics of #Manmarziyan are beautifully chaotic ! The atmospherics combined with the @anuragkashyap72 madness makes this film a truly unusual and magical emotional ride! I was on an @ItsAmitTrivedi roller coaster and enjoyed every bit of it!

Their is so much of loveliness in @KanikaDhillon’s writing!! She captures the emotional beats with ease and expertise! The performances are extraordinary! A superbly solid, silent and sensitive portrayal by @juniorbachchan !! So so proud of his work!!! He is so amazing ! ???

....@vickykaushal09 is all gusto and glory portraying a manic lover with genius abandon!!! He has some moments of brilliance in the film!! @tapseepannu holds the strings of her layered character like an absolute veteran! Bravo!!!!??? #Manmarziyaan