Sidharth Malhotra has begun prep for Sher Shah, the biopic on Vikram Batra who was a Param Veer Chakra recipient for his role in Kargil War. The film is made by Vishnu Vardhan

Biopics have proved to be a gold mine at the box office in recent times, and the trend seems to be going strong. We saw films made on the dauntless valour of the Indian army like Uri - The Surgical Strike and the historical war epic, Kesari. One of Bollywood's most handsome men, Sidharth Malhotra is going making a foray into the genre with a biopic on the life of Captain Vikram Batra. The project is tentatively titled as Sher Shah - Vikram Batra biopic. Sidharth has started his preparation for the role. He took to Instagram to share a picture where we can see him with a gun in his hand. Captain Vikram Batra was posthumously awarded the Param Vir Chakra by India's then-president KR Narayanan. He died during the Kargil War after leading one of the toughest operations in the history of Indian mountain military operations. He was nicknamed as Sher Shah (Lion King) by the Pakistani military. 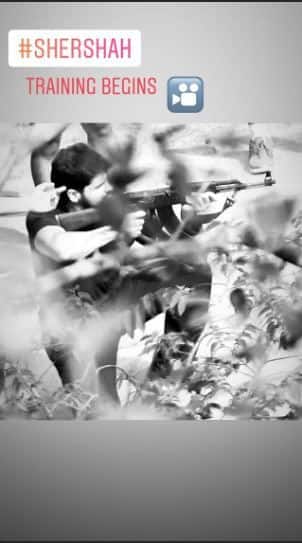 The shoot of the film is expected to start this month. It is expected to release in early 2020. The hunk revealed that he was obsessed with weapons since childhood. In an interaction with Mid-Day, he said, "It will involve a lot of weaponry. I'm obsessed with weapons. My father had got me a pellet gun, the kind that was used in Home Alone (1990), and I was obsessed with that. So, I'm excited to try different weapons for it." He also wrapped the shoot for Jabariya Jodi.

The crazy journey of #JabariyaJodi comes to an end! Thanks to the entire cast & crew for their endless support. Cant wait for you guys to watch the film in cinemas on 12th July 2019 @parineetichopra @balajimotionpictures @ektaravikapoor @ruchikaakapoor @shaaileshrsingh @writerraj

Jabariya Jodi sees him reunite with Parineeti Chopra, his Hasee Toh Phasee co-star. Fans adored their chemistry and named them as #SidNeeti after the film. Besides, he will also be seen in Milap Zaveri's Marjaavan that also stars Tara Sutaria and Riteish Deshmukh. On the personal front, he is rumoured to be dating Tara, his Marjaavan co-star. However, on Karan Johar's chat show he said he was single and his alleged love life was far more interesting than the fun he was having in reality. We hope that Sidharth bounces back with a bang with his upcoming projects. Stay tuned to BL for more scoops!