[PICS] Zero: Anushka Sharma, Katrina Kaif, Aanand L Rai and R Madhavan host a ‘samosa’ reunion but we are wondering as to where is Shah Rukh Khan

Zero releases this weekend and the cast is ensuring that they are seen at all the right places to promote their film. We’ve seen Anushka Sharma and Katrina Kaif coming together for interviews to discuss their respective roles and Shah Rukh going to different parts of the country and world with a gamcha on his shoulder. Today was yet another day when the cast of Zero reunited for promotions. But this time, Shah Rukh Khan was missing from the scene. Also Read - Happy Birthday, Mahesh Babu: Samantha Akkineni, Rakul Preet Singh, R Madhavan and other celebs wish the 'Prince Of Tollywood'

In the photo shared by Katrina, Zero’s director Aanand L Rai is joined by Anushka, Katrina and R Madhavan. The actor plays a cameo in the movie. The Husn Parcham star revealed that the team was on a samosa break. Katrina stepped out wearing a floral printed dress while Anushka accompanied her wearing a chic blue shirt with flowers embroidered on it. She paired the top with a pair of denims. Also Read - Actor Sharman Joshi reacts to Madhavan's hilarious 3 Idiots post about COVID-19 says, 'hope not to join this club'

Check out the picture:


It is no secret that the director loves samosa, so imagine our surprise when Aanand refused to have it today. Yes, you read it right! The director refused to eat the samosa Anushka offered and as a proof, the actress shared the image on her Instagram story. Take a look: 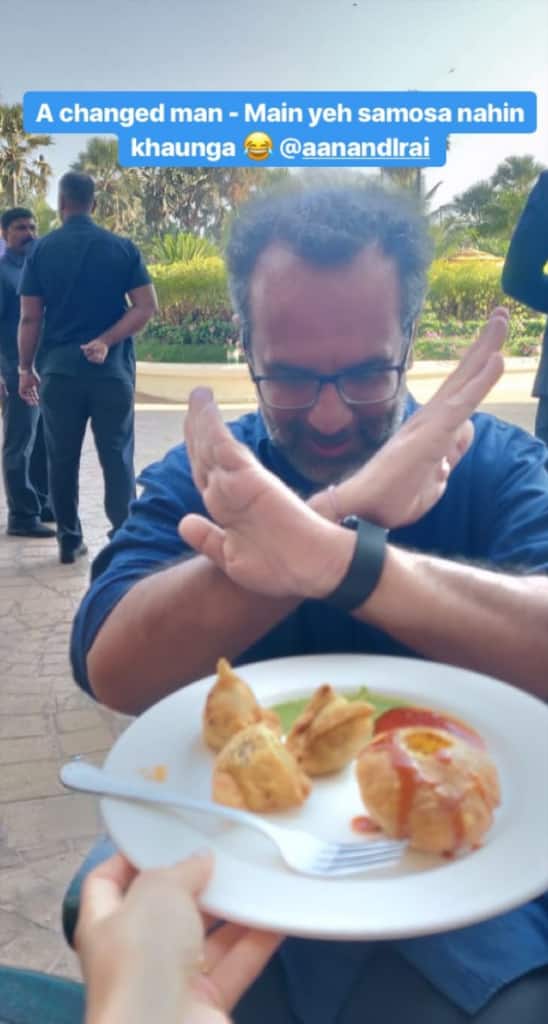 Zero releases this weekend. The film delves in the story of a dwarf, Bauaa Singh, who has a complicated relationship with the two leading actresses. After events unfold, Bauaa manages to find his way to the moon. How – it is for you to watch the movie and find out!