PLAYERS Movie Review: All set to lose the game 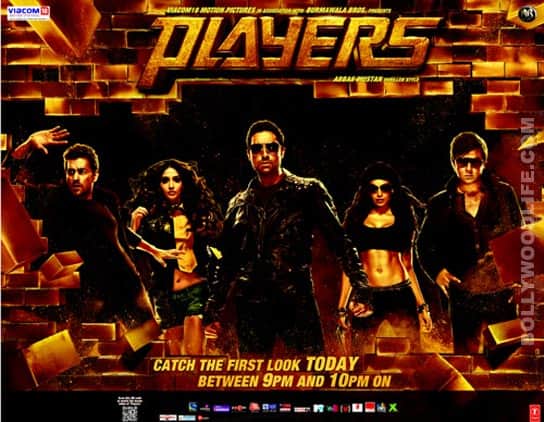 Abbas-Mustan’s mega action-thriller Players, unlike their previous outing Race, doesn’t have many twists and turns initially but once they start spilling there’s no stopping them, turning an already boring film into a laughable and cringe-worthy affair. Read review…

Neil Nitin Mukesh’s character, Spidey, raises a toast and roars "may the best player win!" Sitting in the theatre waiting for the film to get over, you secretly mumble, may all the players be shot dead and let’s get it done with! Your mumbling doesn’t stop there. You secretly hope that none of the entities who have been bumped off so far get resurrected from their deathbed to stretch an already burdensome plot to the tipping point of boredom. But, alas, nobody’s really listening to you. Cars keep on somersaulting and the plot and sub-plot get all clogged up. Snazzy gadgets and shiny people get rolled out in some of the best locales in the world, but nothing seems to hold your interest. Even the best of camera work (Possibly, the only credit-worthy thing about Players) and the stunning-looking Bipasha and Sonam start getting on your nerves after a point. Also Read - Throwback Thursday: Did you know that before Shah Rukh Khan, Salman Khan and one of his brothers were the hot choices for Baazigar?

Abhishek Bachchan (Charlie) is a smart thief who can steal anything from right under your nose with the help of his lady love Ria (Bipasha Basu). Charlie looks up to a jail inmate Victor Dada (Vinod Khanna), whose daughter Naina (Sonam Kapoor) is a master in ethical hacking. Victor and Charlie, with the able assistance of three specialists - an illusionist (Bobby Deol), a prosthetic expert (Omi Vaidya), a car specialist (Sikandar Kher) and a top techie (Neil Nitin Mukesh) hatch the plan of robbing gold worth Rs 10,000 crore. And as expected they pull off the feat. Well, as expected in any heist film, one of the players turns out to be a traitor and wants to hog all the gold. Then the player goes on a killing spree to eliminate the rest of them. But, by the curious twist of fate, a few of them make a comeback (from heaven or hell we don’t know!) to get the stolen gold back from that the player who had turned hostile. Also Read - Happy birthday, Shah Rukh Khan: When SRK told gangster Abu Salem, 'I don’t tell you who to shoot so don’t tell me which film to do'

Players is based on the 2003 Hollywood flick The Italian Job. While the original film intrigues you and propels the narrative with a chain of events like betrayal, murder and double crossing, this Indianised version springs unnecessary and even juvenile twists in a desperate attempt to surprise. The first half of the film, despite the lack of any shock value is watchable in parts. The second half though escalates from being predictable to boring and ultimately becomes a pain to watch. So much so that you become numb to the twist-and-turn saga. The wavering narrative goes for a toss and everything becomes a tedious affair. Generally, films like these compel us to collect the scattered pieces of a jigsaw puzzle and attempt to form a clearer picture. In the case of Players, the emerging picture is so hideous that you stop picking up the totally unconvincing cues. Also Read - Bollywood fraternity send wishes for Dilip Kumar as the legend marks his 96th birthday today

As for the performances, the lesser we talk the better. Abhishek Bachchan is not an ounce different from his last duds Game and Dum Maro Dum. Bipasha Basu looks hot and has delivered a decent performance. Sonam Kapoor struggles to find a place for herself in the film. She hams, cries and mouths her lines but you just don’t empathise. Omi Vaidya’s one-liners elicit a few giggles. Bobby Deol has played his part well while Sikandar Kher has one expression throughout the film and fails to impress. Neil Nitin Mukesh, for some reason, seems to be obsessed with stretching his eyebrow or flashing a lop-sided cunning smile throughout the film. It gets repetitive. Vinod Khanna has done a pretty good job and Johnny Lever’s histrionics provide the much needed respite from the plot. Pritam’s music is uninspiring, flat and boring. The only positive aspect of the film is its lavish cinematography. Overall, Players is all set to lose this game!