Sunny Leone seems to be controversies favourite child. The sexy siren is yet again in trouble and this time coz of singing an incorrect National Anthem. Yes! On Thursday night an elated Sunny shared her happiness for singing the National Anthem at Pro Kabaddi Match.

Surely this will surprise the actress..

But little did she know that she will be in trouble for this. A man named Ullas from Delhi has filed a police complaint against the Mastizaade actress for not singing the song in correct manner. He alleged that the actress has pronounced certain words wrongly and it is completely not acceptable. He further claims that Sunny is a celebrity and she has millions of followers. If she does such mistakes, it will affect the fans also. The Delhi guy is unhappy that being an actor she does rehearsals of her dialogues, why she couldn’t do the rehearsals for National anthem. Now, we wonder what actions will be taken against the One Night Stand actress. Also Read - [Video] Watch Aishwarya Rai Bachchan get teary-eyed while the National Anthem is being played

While on one hand, Sunny’s fans were extremely impressed and proud of her for singing the National Anthem, most of her fans even congratulated the diva on social media, here's someone who is raising objections to it. Check out the complaint copy right here... Also Read - Sara Ali Khan makes her Instagram debut on Independence Day and her first post will make you say 'Mera Bharat Mahan' - view pic 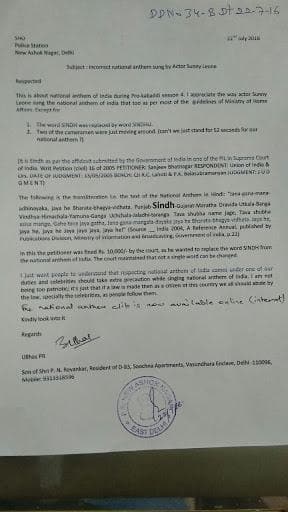