Poll results: Out of Simmba, Zero and 2.0, fans think THIS film will enter the Rs 300 crore club at the box office

Check out the results...

We are all set to bid goodbye to 2018 but not without the company of a few more entertaining movies. We have as many as three big-ticket films up for release and they are expected to shatter box office records. We are talking about, Shah Rukh Khan's Zero, Akshay Kumar-Rajinikanth's 2.0 and Ranveer Singh's Simmba. The buzz of all these films are huge among the masses and to know as to which one has the potential to enter the Rs 300 crore club at the box office, we had conducted a poll. And now we have a verdict. One look at it will tell you that the audience is pretty unanimously positive about one of the three films. And that film is Shah Rukh Khan's Zero. Also Read - Happy Birthday, Rajinikanth! 13 iconic dialogues of Thalaivar that are etched in our mind 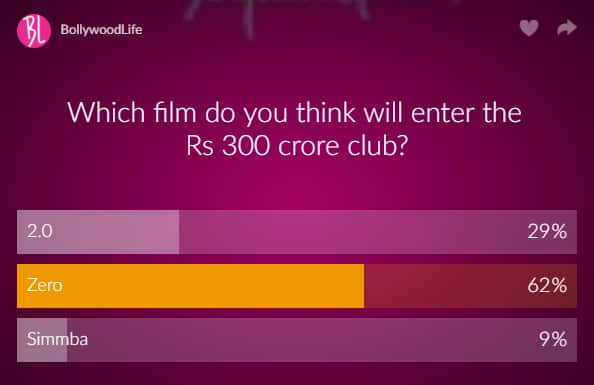 The trailer of SRK, Anushka Sharma and Katrina Kaif's Zero received a thunderous response from the audience and garnered over 100 million views on YouTube. It seems like the promo has struck a chord with the audience, which is reflected in the poll results. 62 per cent of the audience thinks that the Aanand L Rai venture will definitely enter the Rs 300 crore club. With such a huge response, we are sure that Zero will turn out to be the highest-grosser of King Khan.

Zero song Mere Naam Tu: In just 2 minutes, a dwarf Shah Rukh Khan proves that no one does larger-than-life romance better than him

Akshay Kumar and Rajinikanth-starrer 2.0 has received 29 per cent of votes, which means there is a chance that the sci-fi venture will get a good footfall in the theatres. The Telugu and Tamil versions of the film have already received an excellent response in the advance booking and has earned over Rs 120 crore. It will be interesting to see as to if the Hindi version of the mega-budget film will become the next Baahubali at the box office.

Coming to Ranveer Singh's Simmba, the commercial entertainer has received just 9 per cent and we know the reason behind the less numbers. Apart from one poster and some BTS videos, the audience has not seen anything about Simmba yet. But we are sure that post its trailer and song release, the audience will make it a huge money-spinner at the box office. It is a Rohit Shetty film after all.