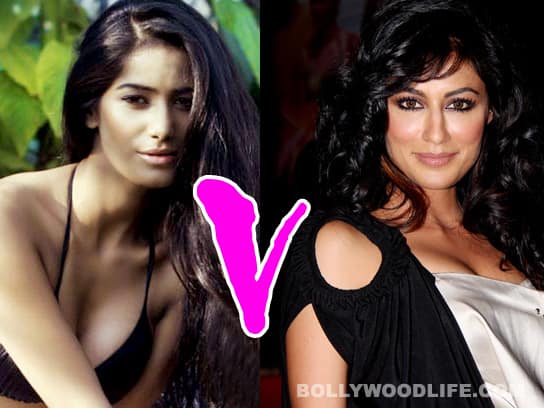 As if her dare bare acts were not enough to create headlines, Poonam Pandey has now launched a verbal assault on Chitrangda Singh

The sultry babe is miffed with Chitrangda for taking a jab at her. It all started when the dusky beauty took a dig at Poonam Pandey for the latter’s desperate attempt to stay in the news. Referring to the Kingfisher babe’s latest picture in a bikini, the Desi Boyz actor had tweeted, “How do you compete with Poonam Pandey, when she is ready to strip for kabbadi matches? Though I have never met Poonam and no prsnl agenda, but guess she does her bathroom rituals everyday and in sometimes that involves striping," Fuming at the unwanted reference, Poonam minced no words in her response. Poonam even called Chitrangda a bitch! She tweets, "It really feels gr8 when people use ur name to garner publicity! It reminds me a dialogue from the film Guru - Jab log tumhare khilaf bolne lage samajh lo taraki kar rahe ho. Jealousy: That's what makes a bitch talk." Also Read - Akshay Kumar's Gabbar Is Back song Warna Gabbar Aa Jayega promises to be a VFX treat!

Poonam further explains the case and backs it by solid numbers. She tweets, "Tweet Hearts!!! There is this actress she had 700 followers since many months started using my name now has 1300+ in a day...hahaha how cheap anyone can be arrey yaar itna bhi garib mat bano :P.” No perks in guessing who the Pandey girl is talking about. Poonam's stormy verbal attack doesn’t stop there, “Envy me; Hate me; Rate me. Face it... You're never gonna be me." We thought with that the Pandey girl will finally rest the case, that’s when another tweet popped up. "Tweethearts!!! I have surprise for u all in next 24hrs! Its gonna get Hot, Hotter & Hottest! :) Luv u all muwaaaaaah! Now its gonna be a Video! U Might have never Experienced! Get ready for the Hottness in next 24hrs.”(sic) Guess, the cat fight just got more interesting! Also Read - After Mallika Sherawat, Chitrangda Singh talks about Narendra Modi