Prabhas' Saaho AVERTS clash with Batla House and Mission Mangal, will now release on this date

Saaho is shot in Hindi, Tamil and Telugu, is made on a whopping budget of Rs 300 crore. Apart from Prabhas, the film features many Bollywood stars like Shraddha Kapoor, Jackie Shroff, Neil Nitin Mukesh, Mandira Bedi, Chunky Panday and Mahesh Manjrekar

This Independence Day (August 15), we were supposed to witness one of the biggest box clashes with Prabhas' Saaho, Akshay Kumar's Mission Mangal and John Abraham's Batla House locking horns with each other at the ticket windows. But now, the makers of trilingual action-thriller Saaho have shifted the release date of the film and will now hit the screens on August 30. The makers of this film shared the news on their social account and also have mentioned that they have not compromised on content and quality. Also Read - Before Satyameva Jayate 2 releases, take a look at Satyameva Jayate 1, Batla House, Dhoom, Jism and other John Abraham movies that set the box office on fire 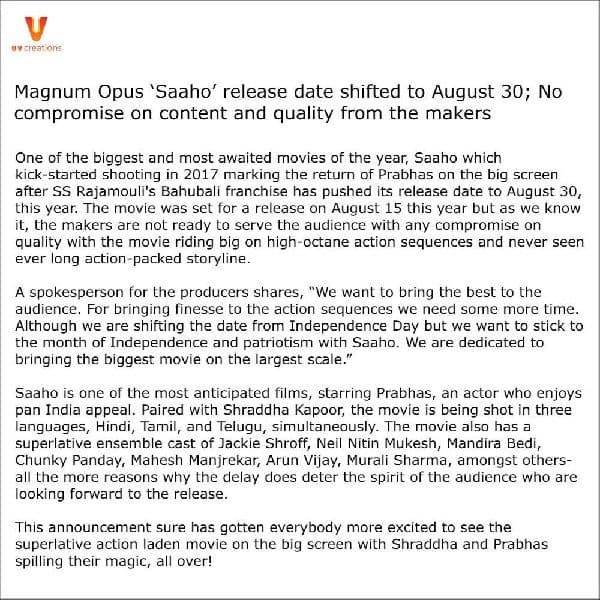 Talking about Saaho, which is shot in Hindi, Tamil and Telugu, is made on a whopping budget of Rs 300 crore. Apart from Prabhas, the film features many Bollywood stars like Shraddha Kapoor, Jackie Shroff, Neil Nitin Mukesh, Mandira Bedi, Chunky Panday, Arun Vijay and Mahesh Manjrekar. Prabhas is reportedly playing the character of a spy and will be seen donning a trench court most of the time and hiding his face in the film. Saaho is directed by Sujeeth, who previously helmed Run Raja Run. Also Read - Sooryavanshi BUMPER box office collection becomes Akshay Kumar's highest weekend opener; fails to match up to Katrina Kaif and Rohit Shetty's highest 1st weekends

Interestingly, director Sujeeth had offered Saaho to Prabhas, way before Baahubali released. During a media interaction, Sujeeth said, "I had the script of Saaho, which was ready before Baahubali. I narrated him the story and he loved it." He further said, "I did not feel the pressure to direct a big star like Prabhas. He has faith in me and my work and that matters the most to me. Also, the producers and the team members showed confidence in me. But now that the film is gearing for release in few months, I can feel the pressure."

A UV Creations production, Saaho will be presented by T-Series and its Hindi distribution is being taken care of by AA Films. So, do you think the makers have taken the right decision by shifting the release date of the film? Tweet to us @bollywood_life.