Kajal Aggarwal and Gautam Kitchlu are soon to become parents. Keeping up with fitness, the pregnant actress has now started taking prenatal classes.

Singham actress Kajal Aggarwal is expecting her first child with husband Gautam Kitchlu. They are soon to embrace parenthood and they seem pretty excited for it. It was during the New Years that Gautam Kitchlu made an announcement about Kajal Aggarwal's pregnancy. He had shared a picture on social media and in the caption he added an emoji of a baby. Fans could not control their excitement and dropped sweet messages for Kajal Aggarwal. Now the acterss is doing her best to stay fit and enjoy the pregnancy phase as much as possible. She is taking prenatal classes for the same. Also Read - From Samantha Ruth Prabhu to Kareena Kapoor Khan: 6 actresses who crossed all limits of boldness on screen

On her Insta stories, Kajal Aggarwal dropped a picture and revealed about attending prenatal classes. However, her cute baby bump grabbed all the attention. Kajal can bee seen dressed in a tank top and track pants. She expressed delight on starting her journey on a healthy note. Also Read - Cannes 2022: Aditi Rao Hydari reveals she 'can’t compete with the giraffes'; says, ‘100 percent I am going to falter’ 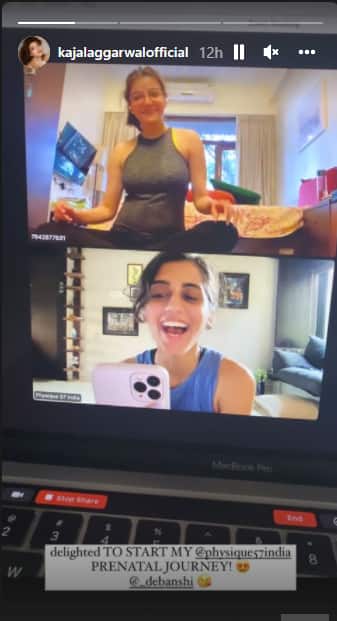 It was in October 2020 that Kajal Aggarwal and Gautam Kitchlu tied the knot and zoomed off to Maldives for their honeymoon. Reportedly, they were in a relationship for almost 7 years before they decided to take the plunge. For New Year celebrations, the couple had flown off to Goa along with family.

Earlier, Kajal had opened up on parenthood and stated that she already feels like a mother thanks to her two nephews. This was before the pregnancy news. She was quoted saying, "I just feel that there’s this whole new part of my heart that I never discovered before these babies entered my life. I am sure that when I have my child, it is going to increase that emotion a lot more."