How cool is this!

Such is the power of internet. Not even in her wildest dreams, Priya Prakash Varrier would have imagined that she will become an overnight internet sensation. She has took over the social media as a clip from the song of her upcoming debut Malyalam film, Oru Adaar love is making everyone go all 'awww'. In the viral video, Priya is communicating with her classmate (Roshan Abdul Rahoof) in an auditorium only with the gestures of her eyes. They raise their eyebrows, she winks and the way he reacts to that is making people watch the video again and again. Especially, it's Priya's wink that is grabbing the eyeballs (saw what I did there?). Priya's fan following is increasing with every passing hour. So much that the 18-year-old managed to set a new record on Instagram. Also Read - 'Wink Queen' Priya Prakash Varrier bags her first award as Viral Personality of the Year

Thank you for all the love and support?

Recording more than 605k followers on Instagram in just 24 hours, Priya came very close to beating American reality TV star and makeup mogul, Kylie Jenner and legendary footballer, Cristiano Ronaldo. Kylie holds the number one spot with 806K followers on a single day followed by Cristiano with 650K followers. So Priya, who currently has 1.7 million followers (and counting) is the third celebrity in the world to get more than 600k followers on Instagram in just 24 hours. How cool is that! Plus, now her account is verified too. ALSO READ: Meet Priya Varrier, the girl who is melting hearts with just one wink in the Malyalam song Manikya Malaraya Poovi Also Read - Wink for the win! One song is all it took Priya Prakash Varrier to become the biggest newsmaker in the first quarter of 2018 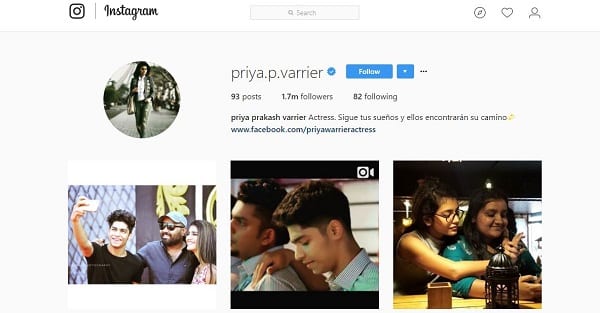 For the uninitiated, Priya is reportedly a B.Com student in Vimala College, Thrissur, Kerala. She is making her debut with this movie. She is also a fabulous dancer (with special interest in Indian classical forms) and she has walked the ramp on local fashion shows in Kochi.