Parineeti Chopra was in the middle of a shoot when she decided to do a little prep before the scene with brother-in-law Nick Jonas and sister Priyanka Chopra's single Sucker. It is the comeback song of the Jonas Brothers

Praineeti Chopra is crazy about her Mimi Didi aka Priyanka Chopra and everything about her. Time and again, the sisters have shown how close they are to each other. Right from being a vital part of PeeCee's bachelorettes to dancing at her Mehendi and Sangeet, Pari has celebrated her darling sister's wedding in the most heartwarming way. Ever since Priyanka and Nick Jonas got married at the Umaid Bhawan Palace in Hindu and Christian rituals, Parineeti has been revealing fun facts and inside stories about the wedding and is in absolute love with her jiju. And now she has proved again how much she loves everything about her sister and Nick. She has shared a BTS video from her shoot. And her rendition of Sucker was 'loved' by Priyanka as well as Nick. Also Read - Priyanka Chopra’s alleged linkups that rocked the industry and shocked fans

Right before a scene, Pari was seen getting in the groove with the Jonas Brothers' comeback single Sucker. Her rendition of the song is so impromptu yet fun that even Priyanka and Nick couldn't help commenting. Have a look at the video: Also Read - Nick Jonas is 'Missing his heart' Priyanka Chopra; shares the most romantic picture ever

My jam to get into the mood for the scene yesterday!! Haha @nickjonas ?? Whatsay!

And here are Priyanka and Nick's comments: 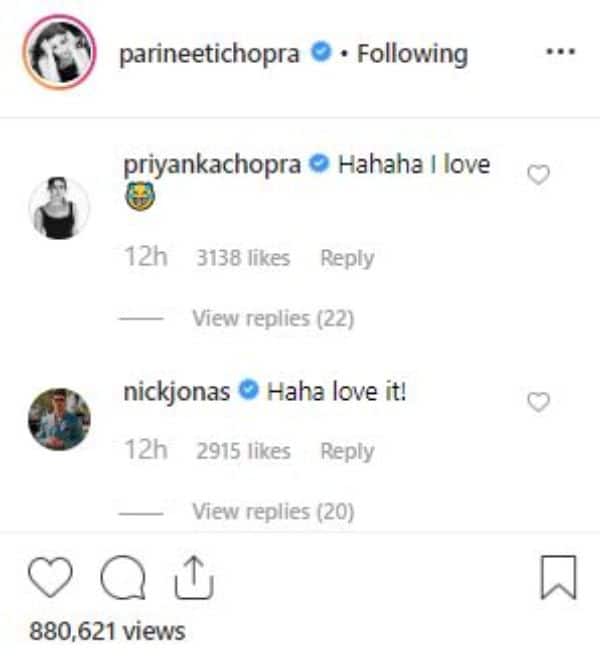 Sweet, right? Well, even we are in love with this video TBH. And we don't Parineeti as Sucker is indeed one of the most loved singles in recent times. And it topping the international charts has proved it. Also Read - Rekha, Aishwarya Rai, Smriti Irani – 7 actors who dropped out of movies before Kartik Aaryan for contentious reasons

On the work front, Parineeti's last film was Namaste England along with Arjun Kapoor. She has Jabariya Jodi with Sidharth Malhotra, Sandeep Aur Pinky Faraar with Arjun Kapoor, and Saina Nehwal's biopic in the pipeline. Another project in her kitty is Bhuj: The Pride Of India.