The Bajirao Mastani actress decided to thank each and every person in her production team for their hard work in a super sweet way!

After winning accolades and a few awards for Mary Kom, and signing an exclusive deal with ABC network, Priyanka Chopra seems to be in a happy space. Before she jets off to the US, the actress decided to take all her staff members by surprise. “She sent a box of goodies to all head-of-departments, staff members and executive producers of Purple Pebble Pictures. Also Read - Deepika Padukone's Padmavati starts rolling on a musical note! 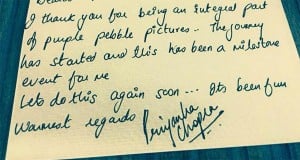 She is feeling blessed with all the things happening on the work front and wanted to thank her team. Also, it was a emotional moment for her as she had just finished the first ad shoot under the banner,” says one of her staffers adding that though she is such a huge celebrity, she is always grounded. “She has helped us and guided us through thick and thin. Now that we have finally started work with our production banner, she made sure she surprised everyone,” smiles the staffer. Also Read - Bajirao Mastani and Befikre have set Ranveer Singh APART from the rest of the actors, suggests trade expert! The ad, in question, was of Unnati Real Estate which PC’s Purple Pebble Pictures designed and shot. Priyanka has handwritten 55 letters and sent a goodie bag which had chocolates, cookies and a bottle of champagne each.