As she completes her final dubbing for Quantico season 3, Priyanka Chopra is having major withdrawal symptoms - view pic

Priyanka Chopra has become a global superstar courtesy her stint as Alex Parrish in ABC's popular TV show, Quantico. The popular crime thriller has impressed one and all, but after suffering a major setback in viewership last season, the channel decided to pull the plug on the show after season 3. While this is a relief for Priyanka as she will be able to give more time to her Bollywood career as well as her Hollywood projects, looks like she isn't so happy after all! This is because she is having major withdrawal symptoms as the show draws to a close and we totally understand her emotions. When you are attached to a show and character for more than a year, you do get used to it and you do get emotionally invloved, right? Also Read - Quantico season 3 promo: Priyanka Chopra's show takes a leap of 3 years and a new adventure begins - watch video

Priyanka Chopra posted a picture on her Instagram stories where we see pages of her lines for Quantico season 3. Yes, the actress is completinng her final dubbing for the series and as she comes to the end of her stint, the actress posted this picture. She wrote on the image, "The last time I ADR (Automated Dialog Replacement or Dubbing) for #alexparrish. I'll miss her." She even added a sad smiley, ain't that adorable? We even got a glimpse of her from Quantico season 3 in the monitor in the background and we gotta say she looks drop dead gorgeous! We see her reading a page in this particular shot. Anyway, check out her post right here and share with us your thoughts about the picture in the comments section below! (ALSO READ - No fourth season for Priyanka Chopra's Quantico and we know the reason why) Also Read - When Alex Parrish hugged Sheldon Cooper, a new Big Bang theory was created 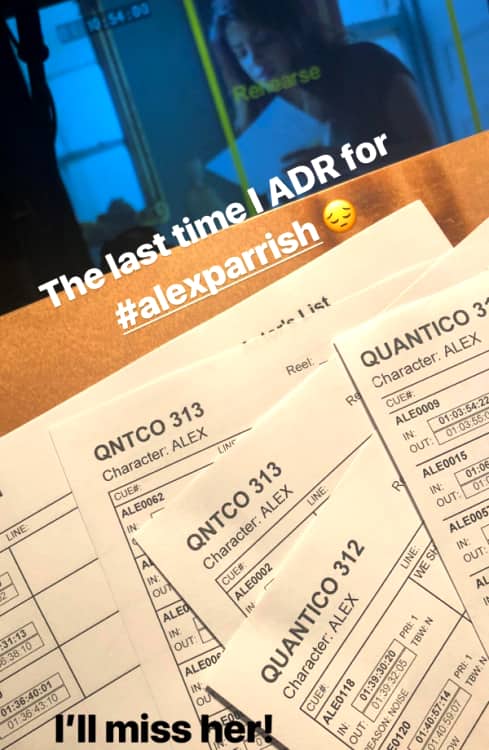 Talking about Quantico season 3, the show is already on air and should wrap up by September. However, Priyanka will return to India by the end of this month and start shooting for Salman Khan's Bharat. She also has one Hollywood release (Isn't it Romantic?) next year, while another couple of films are in the pipeline. So stay tuned to BollywoodLife as we get you all the dope and updates about Priyanka Chopra and Quantico right here