These pics and videos of Priyanka chopra promoting Baywatch with Zac Efron, Dwayne Johnson proves that it's going to be fun to follow them! 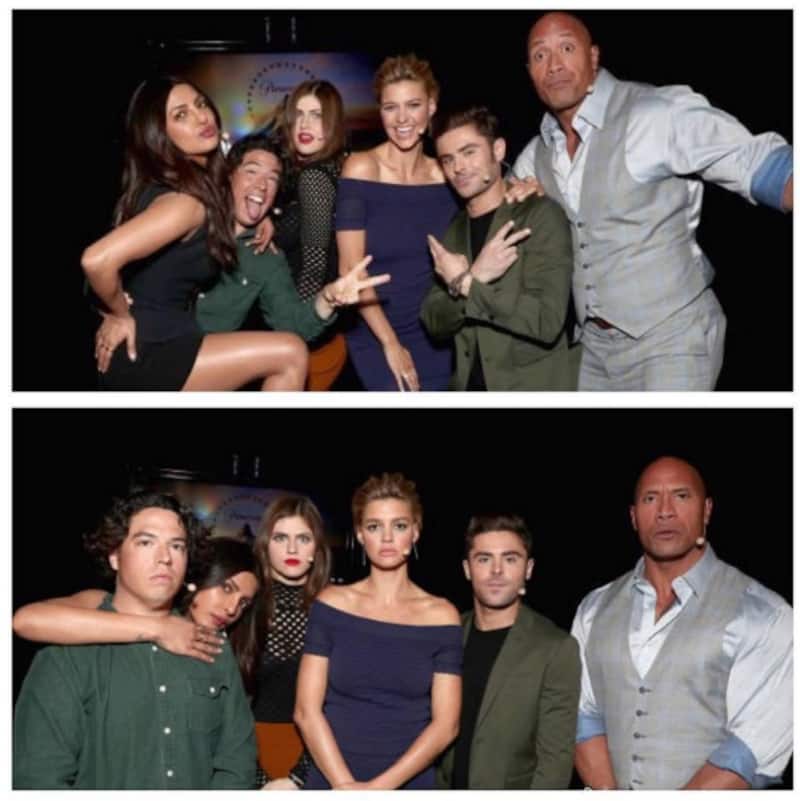 Priyanka Chopra goes crazy at the promotions of Baywatch and we're totally lovin' it. The diva along with her costars Dwayne Johnson, Zac Efron, Alexandra Daddario, Kelly Rohrbach and Jon Bass are in Vegas for Cinemacon. What better platform to kickstart Baywatch promotions? So yeah, Chopra along with her co-stars has gone batshit crazy at the backstage as well as onstage! Thanks to the power of social media, PeeCee shared a number of videos and pictures on her Instagram and Twitter, notifying her groupies and fans that she's in Vegas and she's bringing the house down. Some hours ago, the diva shared a video on Twitter where she revealed that the cast of Baywatch is in Vegas, gearing up to present their trailer at Cinemacon. Turns out in the new trailer, Chopra has dropped the F bomb too! Also Read - Alia Bhatt-Ranbir Kapoor pregnancy: Farah Khan says 'Rishi Kapoor is coming back', Neetu Kapoor reacts

A lot of Cinemacongoers have taken to Twitter to share what the new trailer of the film is all about. Needless to say, people are just loving Victoria Leeds as the foul-mouthed baddie! The highlights of the footage shared by the cast are PeeCee, PeeCee and Zac Efron examining a dead penis. It is true after all, bad has never been so good! Also Read - Trending Entertainment News Today: Shehnaaz Gill on being trolled for PDA with Salman Khan; Parineeti Chopra describes Priyanka Chopra-Nick Jonas' daughter Malti Marie

Anyway, so around the time of promotions, Priyanka unleashed her singing talent once again but this time, she channelled her inner Britney Spears! Singing alongside Kelly and Alexandra, the trio surely had some backstage fun. That soon lead to some insane picture sessions! Apparently, Dwayne and Zac were taking jibes at Chopra but hey, you know the rule, no making fun of the bad guy. While one pic has them pose with a seriousness plastered to their faces, the other pic has a gorgeous Priyanka, flaunting her deadly hot legs! That's just a gist of what has happened. Scroll below to witness the madness.

So you see what happened at Cinemacon. Clearly, it's evident that Chopra is quite the life of the party. She has been like that ever since she made her debut here in Bollywood. After seeing these pictures and videos, we're more than convinced that Baywatch is going to be one of the most comic films of the year. Also, it's going to have the craziest promotional spree. Slated to have a May release, summer's going to get pretty hot (literally and not just because of Baywatch) so make sure you carry enough liquids to hydrate yourself at all times.

And do stay tuned to this space for the hottest updates on the film.