The Roka ceremony of Priyanka Chopra and Nick Jonas was the highlight of today. Despite being a low-key affair, we saw celebs like Arpita Khan Sharma, Anusha Dandekar, Srushti Behl and Mushtaq Sheikh attended the event to wish the couple. The desi-girl of Bollywood shared the picture of their Roka and captioned it, "Taken.. With all my heart and soul.." Also Read - Saaho actress Evelyn Sharma gets engaged to her Australian based boyfriend Dr Tushaan Bhindi

Taken.. With all my heart and soul..

Soon after her insta post, many Bollywood celebs like Ranveer Singh, Alia Bhatt, Hrithik Roshan, Bipasha Basu congratulated the Agneepath actress. But the most special wish for her turned out to be father-in-law Papa Kevin Jonas', who commented, "Congratulations and welcome to our family!" Now isn't that a special wish for our Desi Girl? 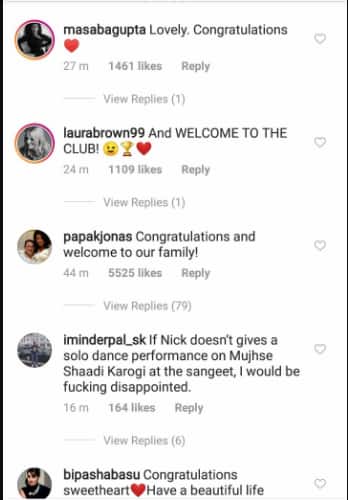 Also Read - #Nickyankawedding: Nick Jonas' favourite Indian dish has made it to their marriage food menu and it is...

The couple is all set to tie the knot in October in Los Angeles. On the work front, Priyanka Chopra has recently started the shooting of Shonali Bose’s The Sky Is Pink. Talking about The Sky is Pink, it is based on Aisha Chaudhary’s life, who became a motivational speaker after being diagnosed with pulmonary fibrosis at the age of 13. Priyanka will play Aisha’s mother in the film. On the other hand, Zaira Wasim will essay the central character in this drama. Farhan Akhtar will be paired opposite former Miss World in this Shonali Bose’s venture.