Pushpa craze has taken over the world. While everyone is dancing on Oo Antava, Sophie Choudry went a step ahead and crooned Samantha Ruth Prabhu and Allu Arjun's song.

Pushpa: The Rise has become one of the biggest success stories that the film industry has witnessed in recent times. The film registered insane collection at box office and fans are still hung onto its blockbuster songs. Samantha Ruth Prabhu's item number Oo Antava especially has received immense attention. The actress' sultry moves teamed with Allu Arjun's swag has made Oo Antava a HIT. Many stars are churning out reels on the song. Sophie Choudry has gone one step ahead and in fact crooned the song. Also Read - Trending South News Today: Whopping budget for Pushpa 2, Sarkaru Vaari Paata star Mahesh Babu's heartfelt note for fans and more

On her Instagram account, Sophie shared a video from the recording studio. She is crooning Oo Antava song and is enjoying it too. In the caption, she wrote "I promised I’d try so this had to be done…Such an EPIC song @thisisdsp
pls excuse the mistakes How did I do ? @samantharuthprabhuoffl @indravathichauhan you rocked the song!" Also Read - Pushpa 2: Allu Arjun-Rashmika Mandanna starrer to be made on a WHOPPING budget? [Read Deets]

Stars like Malaika Arora, Karan Tacker and others shared comments praising her singing talent. Allu Sirish, Allu Arjun's brother and actor, dropped a comment too. He pointed out that there was one mistake in the song sung by Sophie. His comment read, "Woohoo!!! Awesome. On point on everything except one word." Well, it is not an easy song to sing so hats off to Sophie for making an effort. And she did it pretty well, we must say! Also Read - Did Allu Arjun walk off from Atlee's project SHOCKED by the filmmaker's remuneration? 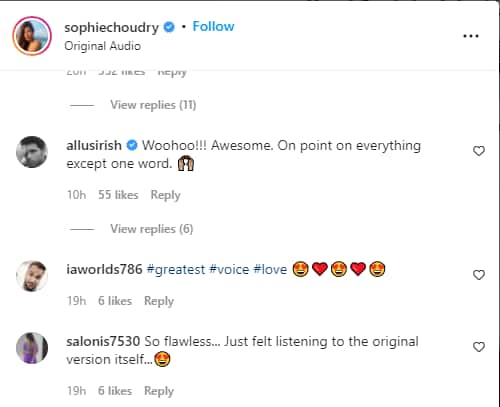