Question of the day: Why on earth did Sridevi choose Puli over Baahubali as her comeback film?

If you are a Sridevi fan, get ready to be terribly disappointed with her comeback film into Tamil cinema

In 1986, Sridevi starred along with Rajinikanth in Naan Adimai Illai. But little did the fans know that it will be the last time in many decades that Sridevi will make an appearance in Tamil cinema. Also Read - Kasautii Zindagii Kay 2 actor Parth Samthaan is all set to make his Bollywood debut opposite Alia Bhatt

After making a stunning comeback into Hindi films with English Vinglish, Sridevi decided to return from her exile from Tamil films with Vijay's fantasy fiction Puli. Touted to be ' A fantasy adventure like never before', Puli was heavily hyped as Sridevi's most awaited comeback vehicle. Rumours had it that Sridevi chose Puli over Baahubali as she wanted to play a character who is as important as the hero. After building a great buzz, Puli released today amidst huge fan fare. Also Read - From Shah Rukh Khan to Aamir Khan: Here's how much these 5 Bollywood celebs earned as their 1st salary and how much they charge now as superstars

And now that I have watched Puli, I can surely say that it was turned out to be a damp squib. Are you guys aware of the thinking dinosaur meme? If not, you can refer the image below. Also Read - Radhika Apte, Arjun Rampal, Kalki Koechlin, Shama Sikander — 12 Bollywood and TV actors who fell in love with foreigners 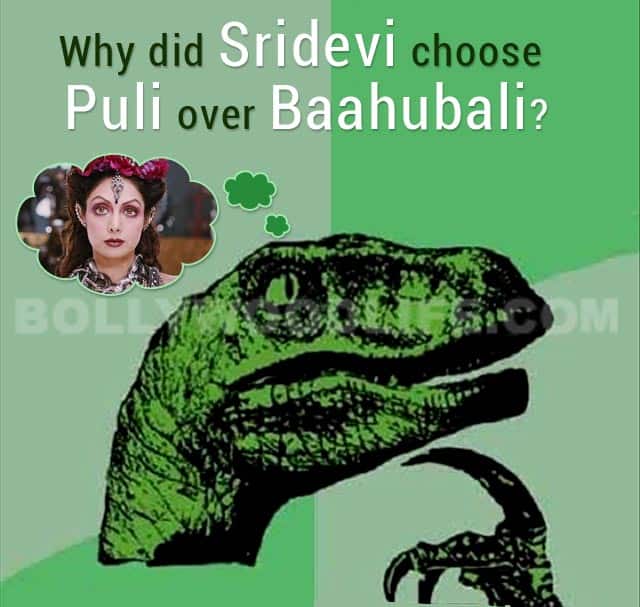 After watching Puli, I am as baffled a the T-Rex in the image above as to why would someone in their sane mind choose a film like Puli, which is an assault on cinematic sensibilities, over Rajamouli's gem of a film Baahubali. There is nothing in Puli that can justify Sridevi's decision to star in it. Sridevi barely has 15 minutes of screen presence and even her character in the film is not as powerful as it was intended to be. Those who craved to hear Sridevi speaking Tamil onscreen after nearly three decades will be terribly disappointed as she has just 10 dialogues in the entire film and none of them create any impact. On the other hand the role of Sivagami which was offered to her in Baahubali had so much meat in it that it truly leave me stumped why Sridevi would say no to it.

Now that Puli is being panned by critics, I wonder if Sridevi would be regretting her decision to chose Puli over Baahubali. And as for the answer to the above question of the day, I wonder if even Sridevi could come up with a convincing answer.