Rajkummar Rao shared a precious picture with cricket legend Kapil Dev along with girlfriend Patralekha, Diana Penty and Aditi Rao Hydari from the Lords stadium where they were attending the inaugural India Cricket Heroes event ahead of the cricket World Cup 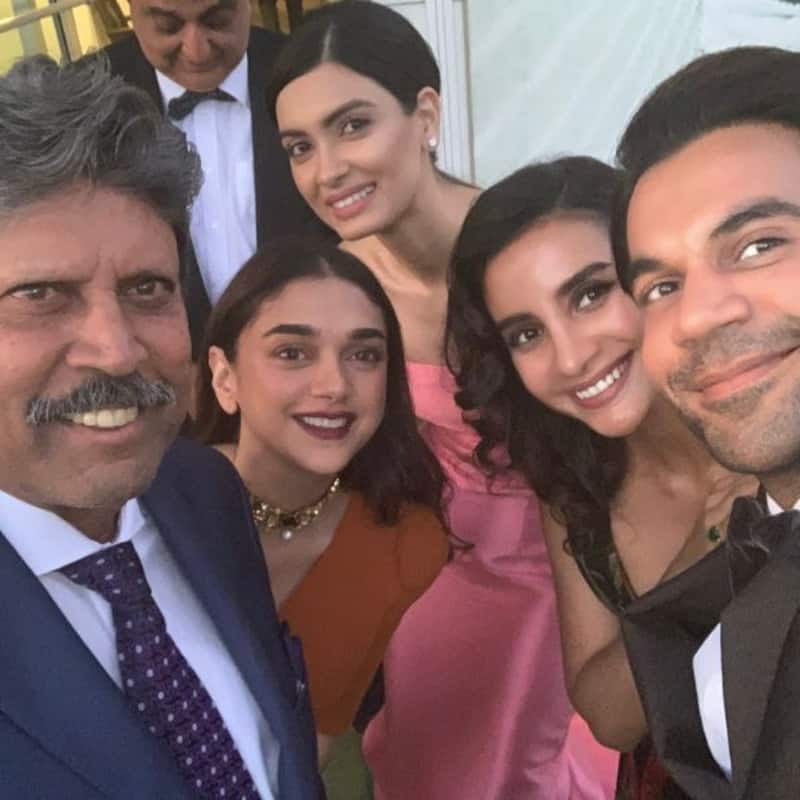 As Ranveer Singh preps with cricket legend Kapil Dev to replicate India's historic win at the Cricket World Cup in 1983 with Kabir Khan's movie on the event, the Indian Cricket team is busy prepping for the upcoming real-life Cricket World Cup which begins on May 30. The team has already left their motherland and had an inaugural India Cricket Heroes event held at the Lords stadium on Thursday.Several eminent personalities from over the world attended this event and among them were Bollywood actors Rajkummar Rao, Patralekha, Diana Penty and Aditi Rao Hydari. And look who they chanced to meet. None other than Kapil Dev. Also Read - Naga Chaitanya-Sobhita Dhulipala, Rashmika Mandanna-Vijay Deverakonda and more: South Indian stars who ruled headlines thanks to their alleged affairs

It was but obvious for Raj to not miss the opportunity and get a selfie as he was totally having his fan-boy moment. We are surprised he held himself back from sharing it with his fans untill today but are so glad he did. Have a look at the picture here: Also Read - Bhediya Movie Review: Varun Dhawan-Kriti Sanon starrer is a fine combo of comedy and drama; seeti-maar surprise entry is worth it

With the legend #KapilDev sir & beauties @Patralekhaa9 @aditiraohydari @DianaPenty where he picked up our first World Cup trophy @HomeOfCricket #Lords. 1983, 2011, Let’s do it again this time. Good luck #TeamIndia. pic.twitter.com/XKhHjfBeeE


Not just the picture, but even the caption is heartwarming. Raj wrote, "With the legend #KapilDev sir & beauties @Patralekhaa9 @aditiraohydari @DianaPenty where he picked up our first World Cup trophy @HomeOfCricket #Lords. 1983, 2011, Let’s do it again this time. Good luck #TeamIndia." Even we have the same sentiment as Raj. What about you? Also Read - Shehnaaz Gill shouts at her bodyguard for pushing fans away as they get close to the actress for pictures; gets lauded by netizens

Later, even Aditi shared a few clicks from Lords. Have a look at them here:

Right before #WorldCup fever takes over.... at the @homeofcricket to support our boys in blue...Go #India ??♥

AND... major fan moment with the legend #KapilDev at the very ground where history was created in 1983! ?#IndianCricketHeroes pic.twitter.com/DG8zzHalZ3


On a different note, Kapil Dev seems to be in contact with a lot of actors these days, no? Anyway tell us how much you liked this picture by tweeting to us @bollywood_life. Meanwhile, prep for Kapil Dev's biopic titled '83 continues. It is directed by Kabir Khan and is bankrolled by Phantom Films, Vishnu Vardhan Induri of Vibri Media, Reliance Entertainment and Kabir Khan Films. It stars Ranveer Singh as Kapil Dev and many other prominent actors like Ammy Virk, Chirag Patil, Hardy Sandhu, Adinath Kothare, Jiiva, Sahil Khattar and more. Stay tuned to BollywoodLife for the latest scoops and updates from Bollywood, Hollywood, South, TV and Web-Series.
Click to join us on Facebook, Twitter, Youtube and Instagram.
Also follow us on Facebook Messenger for latest updates.
Advertisement