Rakhi Sawant is getting slammed by the netzines for wearing heavy jewellery and lehenga at a cancer awareness event. She made the entry at an event with her new found love Aadil. 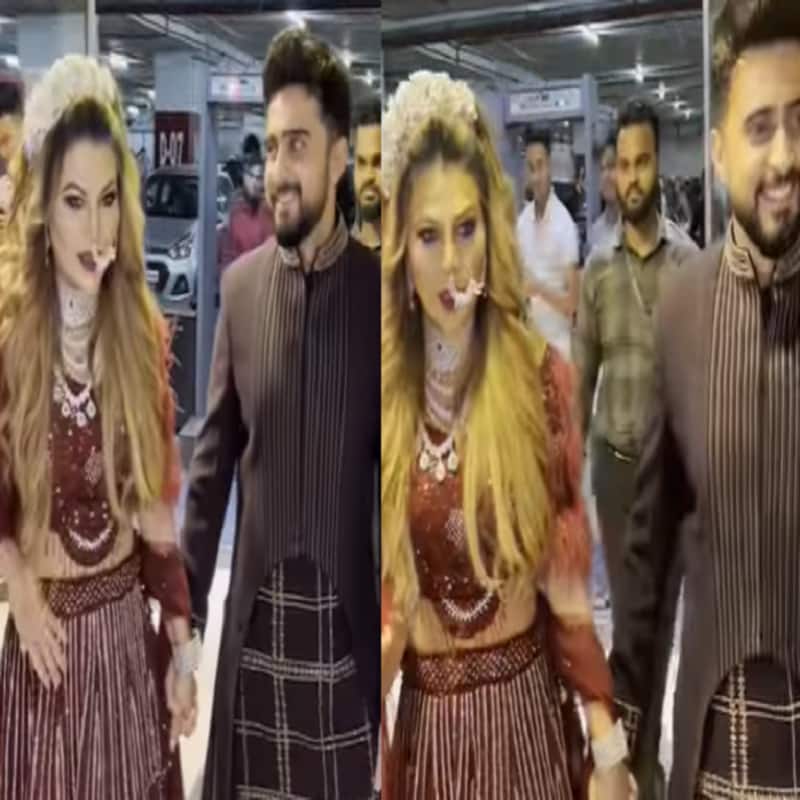 Rakhi Sawant has been grabbing a lot of eyeballs all thanks to the new addition in her life as her boyfriend named Aadil. Rakhi often gets spotted with him painting the town red. She is madly and deeply in love with as she claims. Just recently she attended a cancer awareness event in Pune wearing a lehenga and heavy jewellery along with Aadil and got massively trolled for obvious reason. While she was making her way out of the car, the paparazzi teased her and said, " Qubool Hai". Rakhi blushed and you Aadil that he is saying Qubool Hai, Aadil who rarely talks smiled and asked with whom to the papz? While Rakhi said that she is wearing a very heavy costume and said, 'ye dress ek building jitna bhaari hai.' Also Read - Karan Mehra-Nisha Rawal marital saga: After BFF Rohit Verma's interview, fans comment that their divorce should be televised like Johnny Depp-Amber Heard

Netizens have been strongly slamming her for this heavy dress-up and jewellery and are questioning if she is going for a wedding or a cancer event. Also Read - BTS Photo Folio: After Jungkook, Kim Namjoon aka RM's preview wows ARMY; Bangtan leader's concept of entirety is as profound as him


Take a look at how massively Rakhi is getting trolled for her bizarre choice of dress for a cancer awareness event. One social media user slammed her and wrote, " Auction me pls dal do". Another user wrote, " Cancer awareness this dress ?". The third user commented, " Looks like she is attending a marriage ceremony". Rakhi Sawant met Aadil a few months ago who is younger than her and claims that they are madly in LOVE. While Rakhi was in the headlines for heading towards divorce with ex-hubby Ritesh she made an entry within Bigg Boss 15. The separation was high voltage drama and many thought that this was the end of Rakhi's relationship. But here comes Aadil. No matter what the girl knows how to keep her fans entertained with her antics. However right now her fans are wishing that this time she seriously falls in love and gets settled. Also Read - Kim Kardashian, Khloe Kardashian, Kylie Jenner and Kendall Jenner's HOTTEST bikini and bodycon looks – be sure to view pics in PRIVATE
Advertisement
Stay tuned to BollywoodLife for the latest scoops and updates from Bollywood, Hollywood, South, TV and Web-Series.
Click to join us on Facebook, Twitter, Youtube and Instagram.
Also follow us on Facebook Messenger for latest updates.
Advertisement