Rakul Preet Singh is getting mixed reactions for her latest selfie. The busy actress has quite a few films lined up.

Rakul Preet Sing took to Instagram to share a selfie in which he looked pretty stunning. “On demand post,” read her caption. However, some fans felt that she looked pretty different and wondered if she had undergone a surgery. “Ye kya inhone bhi surgery krwa li yaar ye bollywood walo ko ho kya gya he acche bhale chehre ki waaat lga dete he,” read a comment. “Who is this?” wrote another user. Many others were enamoured by her beauty. “Kudi da pata karo kede pind de ha,” wrote a user. Have a look at her post below: Also Read - Sara Ali Khan, Disha Patani, Janhvi Kapoor and more: Young Bollywood actresses who are set to enter the 'A-list' with their upcoming biggies 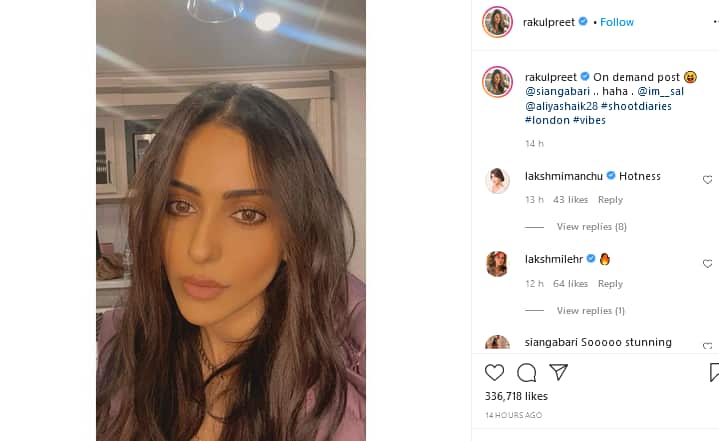 Also Read - Love is in the air: 6 Bollywood and Hollywood couples who CONFIRMED their relationship in 2021

On the professional front, Rakul has Konda Polam, May Day, Thank God, Doctor G, Ayalaan and many other films coming up. Also Read - Rakul Preet Singh and Jackky Bhagnani make their relationship OFFICIAL on the MayDay actress' birthday

Speaking about the excitement of joining May Day, Rakul Preet said, "I have worked with Ajay sir in the past and extremely thrilled to be working with him yet again as his co-pilot in a film where he is not just my co-star but director too:) When I decided to be an actor like all the other aspiring actors I had a dream to work with Mr. Bachchan and I am so glad that with this film my dream to share screen space with him will come true." As you might be aware, the film also features Angira Dhar and Ajey Nagar in pivotal roles.

There was a report in the past claiming that that Rakul had no work in Tollywood. Slamming the report, Rakul had tweeted, "I wonder when I said this. Friends there are only 365 days in a year and if you can help in adjusting more than 6 films that I am doing right now then plz help my team. #anythingforheadlines."