We might be a little late on this one but it's better late than never, right?

The teaser of the much awaited Ranbir Kapoor, Aishwarya Rai Bachchan, Anushka Sharma, Fawad Khan starrer Ae Dil Hai Mushkil is finally out and you have no idea, Karan Johar, how much mushkil our dil is in, courtesy this intriguing teaser! Okay, that was a little corny but sorry about that! There is literally no way possible for us to divulge our emotions of excitement and anxiousness towards this film. After a long time, KJo took on the director's chair to bring together this project and we are more than intrigued. The maker even shared posters of the film yesterday and we brought all the fervour straight to you. In all, three posters were released by the filmmaker. Also Read - 5 times Shah Rukh Khan charmed us with his surprising cameos in these Bollywood films

However, this third poster holds an UNCANNY resemblance with Shah Rukh Khan, Preity Zinta and Rani Mukerji starrer Veer Zaara! One of the best romantic movies of all time, Veer Zaara is one such film that will never leave our memory when it comes to voting for the best romantic drama. And looks like KJo's Ae Dil Hai Mushkil is rooting for the same kind of laud that the Yash Raj film garnered with the same poster! In Veer Zaara's poster, we see SRK and Preity caught in an intense moment while Rani turns and stares at us. Now look at Ae Dil's [poster. Ash and RK Jr are caught in the same intense moment, probably a little more passionate with romance rather than pain in their eyes and body language while Anushka turns and stares at us with a similar look. Also Read - Karan Johar to announce his next directorial venture with Ranveer Singh and Alia Bhatt tomorrow? This video suggests so 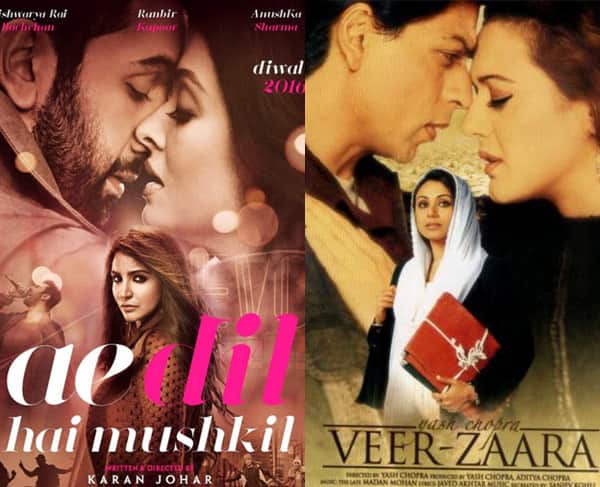 Now we would like to take you back to their second poster which again has a resemblance with Yeh Jawani Hai Deewani's poster. The only difference is that with Anushka, Ranbir Kapoor is shown in a singing pose as he holds a microphone in his hand, while with Deepika Padukone, he has his dance shoes on and is posing with an excited passion towards partying. But the similarity is between Anushka’s laughter in the poster to Deepika’s in YJHD poster. Even their pose is kinda similar. Well, a lot of times this does happen that the posters of several films do end up being similar.

We wonder if it was intentional considering how both the films were such a rage and one was in fact, a Dharma movie itself. Everybody remembers the posters of both the films quite well and considering how this film is set to give one sided lover, a whole new perspective, we cannot wait to see what KJo has up his sleeves! But we have got to as you if you saw the resemblance that we did. Yes or no, give us a cue in the comments section below!

Oh and do stay tuned to this space for more gossips and latest updates for we got a lot of stuff for you! Also, watch the teaser and tell us how excited you are for the trailer and also Diwali! (since it's releasing on the auspicious occasion!)