Lovebirds Ranbir Kapoor and Alia Bhatt were stationed in Bulgaria for the past few weeks finishing the second shooting schedule of their upcoming film, Brahmastra.

Lovebirds Ranbir Kapoor and Alia Bhatt were stationed in Bulgaria since the past few weeks, trying to finishing the second shooting schedule of their upcoming film, Brahmastra. We got timely updates from Alia, Karan Johar and Ayan Mukerji's social media pages about the shoot. We have been drooling over their BTS pictures from their time in Bulgaria. And here is another one, even though they are back in India now. Also Read - From Urvashi Rautela to Sunny Leone: 5 Bollywood actresses who posed topless in their dare to bare photoshoots

In this selfie, that is going viral on social media, Ranbir and Alia, put on their quirky selves on display. They both are making weird faces for the camera. Certainly, they were in a fun mood when they clicked this picture. Well, if this is a glimpse of their chemistry on screen, we are sure Brahmastra is going to be a fun ride. (ALSO READ: After wearing Ranbir Kapoor’s favourite brand, Alia Bhatt steps out in a jersey featuring his favourite number – view pic) Also Read - BTS's Jungkook, Alia Bhatt, Kylie Jenner and other stars who are hooked to 90’s bucket hat trend - view pics

BTW, before Brahmastra we might just get to see them on the small screen as guests on soon-to-premiere Koffee with Karan 6. DNA After Hrs quoted a source saying, "Karan has already spoken to Alia and Ranbir and convinced them to come together on his show. He is extremely close to both of them and they couldn’t decline his request. Karan wants to get the much-talked-about duo to spill the beans on their affair." Also Read - Trending entertainment photo gallery: Alia Bhatt, Kangana Ranaut, Vicky Kaushal, Saira Banu and more celebs viral pictures of the day 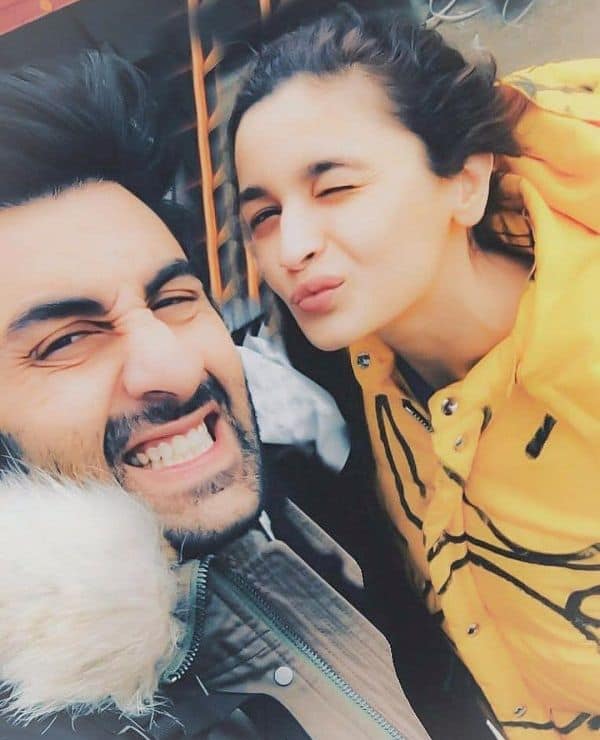 Earlier, in an interview, Ranbir opened up about the fact that it is public knowledge that he is dating Alia and yet he remains tight-lipped about it. “Honestly, I am not playing hide-and-seek,” Ranbir said, adding, “I am in a happy, positive and beautiful phase of my life. But you can talk about your personal life only to a degree. Otherwise, it becomes the forerunner of your life and work takes a back seat. Surely, there is always excitement to know about someone’s personal life. But you want to give the relationship respect so that people don’t malign it in a gossipy way. It is something beautiful, sacred and really important to you, so you want to deal with it in a nice manner.”