Are Ranbir Kapoor and Alia Bhatt getting married soon? We have spotted two hints in two days that prove the wedding preparations have begun.

Bollywood baby and Bollywood shaadis are nothing less than festivals for all enthusiasts of Hindi cinema. After the much awaited Varun Dhawan and Natasha Dalal wedding, all eyes are now on Ranbir Kapoor and Alia Bhatt's big day. Fans of RanAlia have been waiting since long to see the two young and talented stars to tie the knot. And once again, there are speculations that the wedding preparations have begun. Interestingly, in just two days we spotted two hints that Ranbir Kapoor and Alia Bhatt are getting closer to walking the aisle. Talking about the hints, we first spotted the soon-to-be dulke ki maa Neetu Kapoor and the dulhe ki behen Riddhima Kapoor Shahni visiting designer Manish Malhotra. Also Read - Kasautii Zindagii Kay 2 actor Parth Samthaan is all set to make his Bollywood debut opposite Alia Bhatt

Now, we all know that Manish is a favourite when it comes to wedding wear for the Bollywood peeps. So could it be that mommy Neetu and Riddhima are already out picking their designer wear for the wedding? Or is it just a casual catch up to meet and check out the new collection? We can only guess. Also Read - After Sonu Sood, Arjun Rampal and Sameera Reddy test positive for COVID-19

The second hint was a picture posted by Rajendra Singh Choreographer, aka Masterji. He is the man behind the choreography for many a weddings of Bollywood waalahs. He shared a picture of him and Ranbir, which they took at Armaan Jain and Anissa Malhotra’s wedding last year. Also Read - Priyanka Chopra, Anushka Sharma, Alia Bhatt, Ranbir Kapoor – let us take a look of pets of top Bollywood celebs 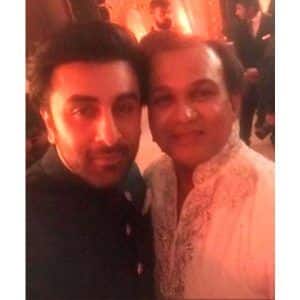 He is the same masterji whose dance video with Neetu Singh on Ranbir Singh's song Ghagra had gone viral last year in October, again sparking speculations about Ranbir Kapoor and Alia Bhatt wedding.

Well, till the announcement doesn't come from the family or the couple included here themselves, it will all be but speculations and rumours. But we are sure, these two latest hints will keep RanAlia fans excited about the nearing possibilities of seeing their favourite stars turn into man and wife, officially.

On the work front, the teaser of Alia Bhatt's Gangubai Kathiawadi, directed by Sanjay Leela Bhansali, released on Wednesday and took social media by storm. From fans, to media, to Bollywood celebs and South Cinema mavericks, everyone has heaped praises on Alia's performance. The film is slated to release on July 30, 2021 where it will clash with Prabhas and Pooja Hegde's Radhe Shyam. Ranbir Kapoor on the other hand has Shamshera with Vaani Kapoor. It will hit screens on June 25, 2021. He is also shooting for Luv Ranjan's next with Shraddha Kapoor and will then start shootingf or Animal. Both of these are slated for a 2022 release. But the most awaited film starring Ranbir Kapoor and Alia Bhatt remains to be Brahamastra which hasn't got a release date as yet. Well, will the shaadi happen before or after the Karan Johar and Ayan Mukherjee film will release, remains to be seen.