The Censor Board has come up with new ways of curbing freedom of expression and here are some films that NEED to worry, after this

Filmmakers have always feared edits, beeps and bans from the Censor Board, courtesy kissing scenes, sex scenes, on-screen smoking, violence. And now the latest to add on to this Censor terror is the new list of cuss words that'll soon be forgotten from Bollywood. Yes! An official list has been put forth by the Censor Board highlighting all the English/Hindi abusive terms that cannot be used in films any more. A fallout of the AIB controversy? May be!

Here are 5 films which I think will easily become the next target of the Censor Board... 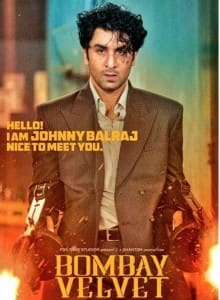 It's an Anurag Kashyap film, the director who is known for mastering the anti-Censor genre! With films like Dev D and Gangs Of Wasseypur to his credit, Kashyap hardly sells anything without an abusive word or violence. The darker side of the plot is his style and Bombay Velvet is no different. Featuring Ranbir Kapoor as the street boxer, the film is a neo-noir drama set in the Bombay of 80s. And the posters have already given me a vibe of what to expect out of this film- a typical Kashyap material. Censor has already begun its argument on the film's release.


Anushka Sharma's maiden production is a road trip saga that spells angst, violence and a lot of action. The trailer was recently released putting up an outrageous show of fury. Miss Sharma is coming up in an all new avatar and so is her co-star Neel Bhoopalam. We are eagerly waiting for this thrill but I am sure the Censor Board is waiting for the wrong reasons.


This Mallika Sherawat film is facing an unending wrath from the Censor scan. The posters insulting the Indian flag have not gone down well either and so have the obscene sequences featuring Mallika in the film. The initial release date was meant to be on the 6th of January. But today, we are on the 13th of February, and there's no clue on when it will releasing. Postponed to infinity, is it?


The Sunny Leone starrer had recently released its trailer, defining eroticism to an all new diction. Definitely not getting affected by the 'cuss word rule' but, the adult sequences will for sure get Ek Paheli Leela under a severe Censor ban. Can any Sunny Leone film come out any more?

Do tell us what do you think of Censor Board's objection. Fair or unfair? Write to us in the comments below!