Kangana Ranaut's sister Rangoli Chandel took a dig at Taapsee Pannu by sharing a screenshot of the latter's vacation picture from St Petersburg, Russia wherein she is seen wearing a sari and sunglasses.

It seems like the tussle between Kangana Ranaut, her sister Rangoli Chandel and Taapsee Pannu is not going to end anytime soon. Rangoli had hogged limelight after she had taken a dig at Taapsee calling her a 'sasti copy' (cheap imitation) of Kangana. And since then Rangoli and Kangana had been at loggerheads with Taapsee who has chosen not to pay heed to Ranaut sisters criticism. And yet again, Rangoli has called Taapsee a 'creepy fan' of Kangana saying that she has no talent of her own. Also Read - Kangana Ranaut's spellbinding transformation from Thalaivi to Dhakaad proves no one is as adept as her at shape-shifting

Taking to Instagram stories, Rangoli couldn't stop gushing about the way Kangana has been innovating her sari looks. She shared multiple images of Kangana stepping out in a sari and pairing it with sunglasses. "Kangana is a great style icon to all. Her only aim is to inspire women to wear saris and revive our own handloom industry. It gives me great joy to see how young women get inspired and follow her, we all do. I mean look at her who wouldn't be inspired by her,” Rangoli wrote in her back-to-back Instagram posts. Also Read - Kangana Ranaut expresses shock and grief as a fan dies in Himachal Pradesh landslide; 'This is beyond tragic... Oh God!'

Rangoli then shared a screenshot of Taapsee's vacation picture from St Petersburg, Russia wherein she is seen wearing a sari and sunglasses. It also featured a reply from Taapsee to a user who praised her looks. "Time to make sari cool I say!” Taapsee commented. Also Read - KRK SLAMS Kangana Ranaut for her remarks on Raj Kundra's arrest: 'Aakhir kya majboori hai iss gutter me rehne ki?'

Then Rangoli responded to Taapsee in her Instagram stories saying, "But but, to desperately research everything about Kangana as you have no talent of your own, like an obsessed creepy fan and copy not just her quotes, looks, style then to claim to have made sari cool, matlab kuch zayada ho gaya na… or fir kehti ho mujhe sasti copy bola (isn’t that a bit too much? And then you protest about being called a cheap imitation) @taapsee.” 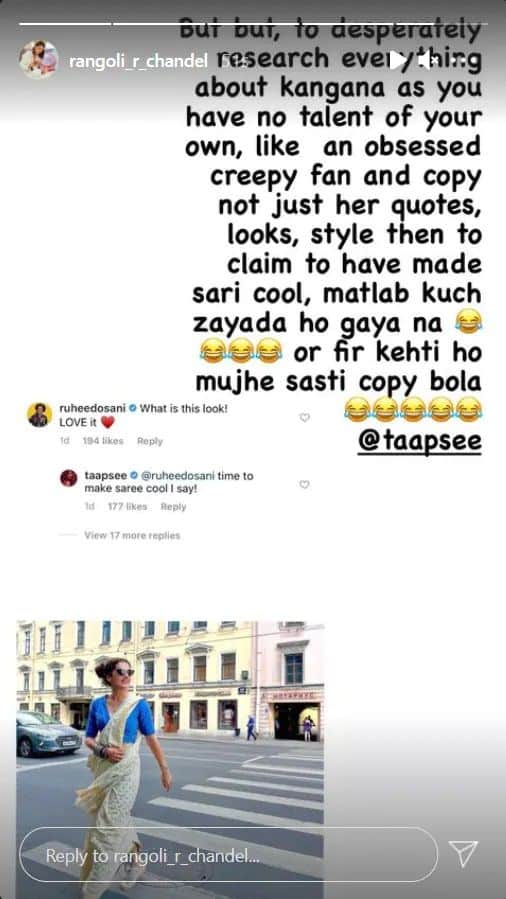 However, Rangoli was quick to delete the post and later posted a modified version of it "What is not cool to be a creepy fan who obsessively not just copies every interview and looks style but whole work model but on a small scale and goes on to make unkind and mean remarks about the legend, again today when I see this I wonder copy look ok fine but to claim to be the one who made sari cool hmmm you aren’t getting away with this honey @taapsee,” she wrote. 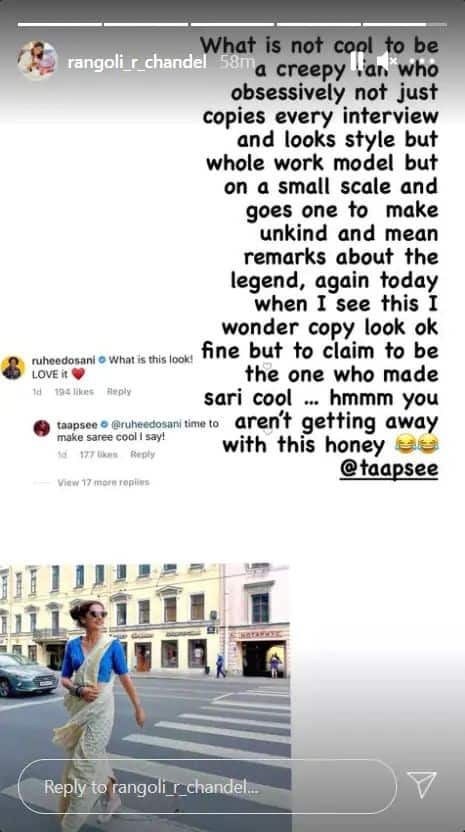 It remains to be seen how Taapsee would respond to Rangoli's jibe.