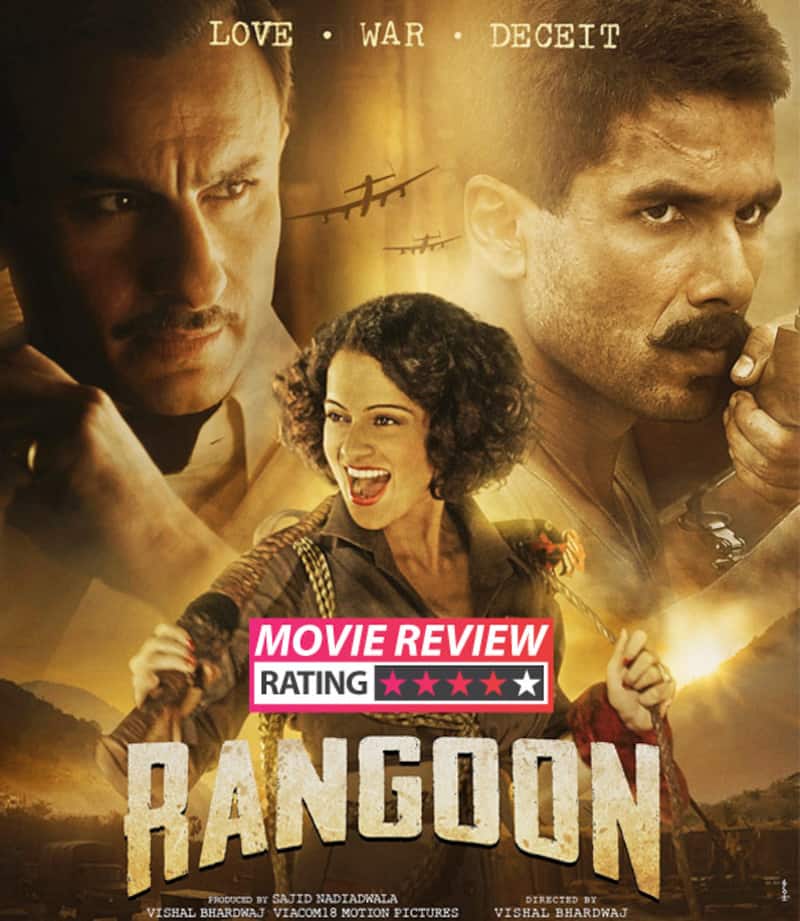 For so long now we've been entertained by the Rangoon stars - Kangana Ranaut, Shahid Kapoor through their war of words during interviews and events. In fact, Shahid in an interview even hinted that this Vishal Bhardwaj film would be his last movie with Kangana, but after watching the movie we hope that he was just kidding. Coz Kangana and Shahid together share a very organic and raw chemistry that is rare to find. And without wasting anymore time let's dive into Rangoon and tell you what were our thoughts about VB's latest venture... Also Read - Raksha Bandhan 2022: Bollywood stars who are more successful than their brothers and sisters

Rangoon is a love story set in the 1940s. A time when India as a nation was at the peak of it's freedom struggle. It was also when our countrymen were most divided with leaders like Mahatma Gandhi and Netaji Subhash Chandra Bose proposing opposite ideologies to fight the British. A time when amidst all turmoil in the country the film industry was booming and yet struggling to stay alive. The film precisely delves into these three aspects and revolves around Julia (Kangana Ranaut), an actress who portrays bold characters on celluloid. She is unaffected by the ongoing freedom struggle and is happy dreaming about becoming Mrs Billimoria. Yes, Julia is head over heels in love with Russi Billimoria, an action hero who has now turned into a famous filmmaker. However, when the country is amidst a freedom struggle nobody is unaffected, not even the elites in the movie business. And hence Julia and subsequently Russi (Saif Ali Khan) end up finding themselves in different kinds of troubles thanks to Jamadar Nawab Malik (Shahid Kapoor). When it is a Vishal Bhardwaj film it has to be about love, passion, betrayal and more and Rangoon has all shades of emotions. Also Read - Abhishek Bachchan blamed for stealing things from his film sets; the actor REACTS

The three protagonists - Kangana, Shahid and Saif deliver their best performances even in a plot that sometimes curbs them. Julia is a brave heroine, she fearless and not shameful of admitting that she's a bastard. Even when a royalty tries to dig into Julia's private life in a bid to embarrass her, she literally unleashes her nonchalance on the sneering ladies. There's not one moment in the entire film that Kangana let's her character Julia down. She is naive, sweet, vulnerable under her strong demeanour. She is a woman helplessly in love and not ashamed to admit it.

Shahid Kapoor aka Nawab Malik is a man on a mission and nothing can distract him, not even love. He gives in to his instincts of passion, but not even a damsel in distress, who he also loves, can take his eye off his real goal. Shahid plays an army captain/jamadar with ease and lends easily to his character. He's rugged, mysterious and at the same time very very affectionate, he is the real hero of the movie with almost zero grey shades. The only flaw our tragic hero has is, his love for a woman who is already in a relationship with another man, who unfortunately is on the enemies side.

Russi Billimoria is the character that you end up hating and sympathising with at the same time. Unlike Nawab he's not the righteous one. He's filled with flaws, and Saif Ali Khan deserves full marks for making Russi a character with many many shades. He's a shrewd businessman who can embrace the British for his personal gains. He controls Julia and will not let love take away the focus from his movies. And yet, he's the one who will leave his father's well established business to be with a woman he loves. He's mean, control-freak, business-minded, jealous, insecure and human. And even in a limited canvas Saif shows that's he's an actor to watch out for.

The characters in Rangoon are equally good, be it the British commander Harding, played by Richard McCabe or then Julia's makeup man Zulfi, played by Saharsh Shukla. Both these characters that seem harmless and funny in the beginning surprise you as the movie progresses. McCabe is super entertaining and almost manages to steal the show from Ms Julia on many occasions.

Vishal Bhardwaj does deserve a mention for bringing three actors who are strikingly different under one project and getting them to deliver their best. He also deserves applause for taking you to the era of freedom struggle. The Indian National Army version of Rabindranth Tagore will give you goosebumps. The war scenes and detailing are impeccable.

There are three things that could have made Vishal Bhardwaj's Rangoon near perfect. Unlike his earlier films the director detoxes the film of any kind of layers. The presentation is simple and straight and it's great, except that at points you almost feel the lack of any kind of surprise making it too predictable. Even that could have been passed off, but what doesn't work is the pace, some unnecessary songs that kill the narrative and a little more of Russi aka Saif Ali Khan in the film.

If you are a Vishal Bhardwaj fan, let us warn you that this might not be his best, but we bet you'll see another kind of a storyteller here. And yes, he does deliver a movie that is embedded with fine performances from the cast and great visuals by cinematographer Pankaj Kumar and that makes the movie deserving of a watch despite its flaws.