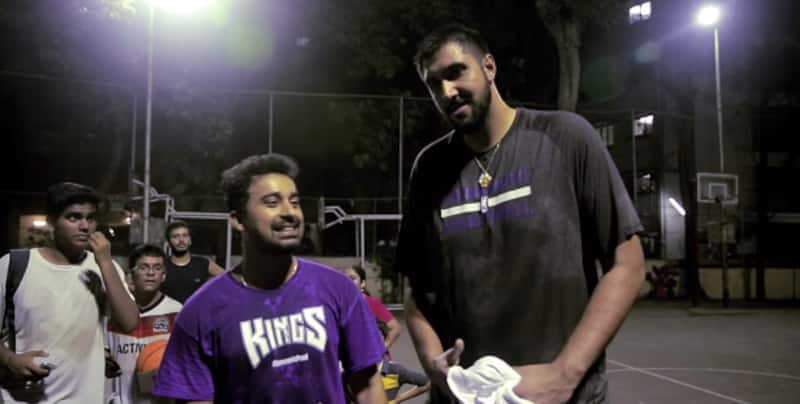 The Roadies star was seen spending time with the international basketball player for a noble cause...

NBA’s first Indian origin player Sim Bhullar is currently in India to promote the game of basketball. Sim and Rannvijay Singh Singha, who is a basketball enthusiast surprised the kids at YMCA, Bandra recently. The kids had no idea of the surprise planned by NBA India and they were very excited to share the court with the NBA player and Rannvijay. Also Read - Shah Rukh Khan, Disha Patani, Ranveer Singh and more: Bollywood actors and their lesser-known siblings

Since coming to India, Sim has met many famous celebs like Abhishek Bachchan, Priyanka Chopra, Ranveer Singh and so on. But it was the first time that he played the game of basketball with people in India. What made it more special was the fact that he had a one to one session on the basketball court with the youngsters who were enthusiasts of this sport. The kids were obviously excited to see such a big star amidst them. Sim also gave in for a photo session with the kids where he took selfies with them. Apart from giving the kids some tips for basketball, Sim also managed to show them some cool moves, which everyone enjoyed excessively. Also Read - Ahead of Ranveer Singh in Cirkus, list of Varun Dhawan, Kangana Ranaut and other actors who did double roles and their box office collections

Via this initiative NBA is trying to popularise the sport in India and the sub-continent. This in true sense is what globalisation of a sport means. So go ahead BollywoodLifers, have a look at this video and let us know how you like it. Also Read - Hansika Motwani to Alia Bhatt: Celeb brides that left us speechless in their pre wedding festivities