[INSIDE VIDEOS] Ranveer Singh, Hrithik Roshan and Anil Kapoor set the stage on fire with their electrifying dance moves at a wedding in London

Ranveer, Hrithik and Anil fire up the stage with their kickass moves at a wedding in London - watch videos... 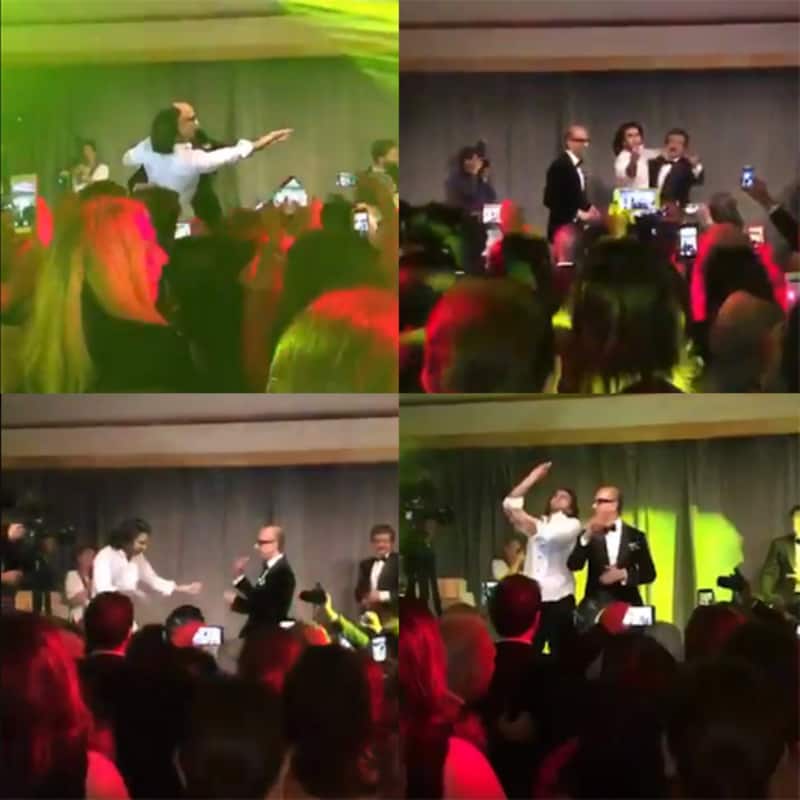 Has Ranveer Singh ever left us disappointed? Nope, never! There hasn't been a single dull moment in Ranveer Singh's life and continues to spread his infectious energy everywhere he goes. For all those who have been thinking Ranveer's missing in action since a while now, we have got you something that will make your Monday morning better. Also Read - Ranveer Singh-Deepika Padukone, Aishwarya Rai Bachchan-Abhishek; when distasteful separation rumours of Bollywood's loved couples grabbed eyeballs

As we had told you earlier, Ranveer is currently in London for a wedding and we have got our hands on some of the INSIDE pictures and videos from the wedding. Mr Singh is seen making the crowd burst into a loud cheer as he braces the stage to show some kickass dance moves. Well, that isn't surprisng at all, is it? He is seen dancing like crazy with Anupam Kher and Anil Kapoor and the trio are setting the stage on fire, quite literally! The actor danced popular chartbusters like DJ Wale Babu, Tamma Tamma and Tatad Tatad and the audience just didn't want him to stop. (ALSO READ: Ranveer Singh, Hrithik Roshan and Karan Johar are busy pouting in London and we know why – view pic) Also Read - Alia Bhatt in Heart of Stone to Deepika Padukone in Pathaan: Bollywood heroines who will kick some b*tt in upcoming new action movies

Check out the video right below... Also Read - Is Vikram Vedha a frame-to-frame remake of the Tamil original or has it been changed? Directors Pushkar-Gayathri CLARIFY

See, we told ya, isn't this one of the most electrifying performances ever?

For those who don't know, RS is currently in London attending an industrialist's wedding festivites. Along with him, Karan Johar and Hrithik Roshan too are present at the wedding. The internet is flooded with thier pictures together.

PIC #11 Ranveer Singh poses with the bride and groom along with @karanjohar , @iHrithik and @AnilKapoor ? #KissMuss pic.twitter.com/nhBIzchbge


On the work front, Ranveer is currently prepping real hard for his role in Padmavati. We hear that the film is in its final stages of shooting and in fact, Ranveer's girlfriend Deepika Padukone, who plays the lead in the movie, is done shooting for most parts of the film. Padmavati is helmed by Sanjay Leela Bhansali and also stars Shahid Kapoor in titular role. Stay tuned to BollywoodLife for the latest scoops and updates from Bollywood, Hollywood, South, TV and Web-Series.
Click to join us on Facebook, Twitter, Youtube and Instagram.
Also follow us on Facebook Messenger for latest updates.
Advertisement