Another day, another social media PDA for Ranveer Singh and Deepika Padukone.

Deepika Padukone and Ranveer Singh's relationship is getting stronger by the day. The two met on the sets of Sanjay Leela Bhansali's film, Goliyon Ki Rasleela Ram-Leela and hit off instantly. For nearly six years, DeepVeer kept their relationship away from the public eye. Only months before their marriage, the duo made their relationship official. The two love each other wholeheartedly and their social media is proof. DP loves commenting on her husband's Instagram posts and so does Ranveer. And almost every day, they make us gush with their romance. Take for instance- Deepika's latest post. Also Read - Deepika Padukone is The Family Man 2 actress Samantha Akkineni's fashion inspiration and these pictures are PROOF

DP shared a drop dead gorgeous picture of herself with a caption that read, "A day without laughter is a day wasted...”-Charlie Chaplin ?: @zoieakhtar." And Ranveer was all hearts for it. Without saying a word, he let the emoticons do the talking. Also Read - After DECLARING Shah Rukh Khan as India, Tom Hiddleston aka Loki reveals the movie which made him a diehard fan of SRK 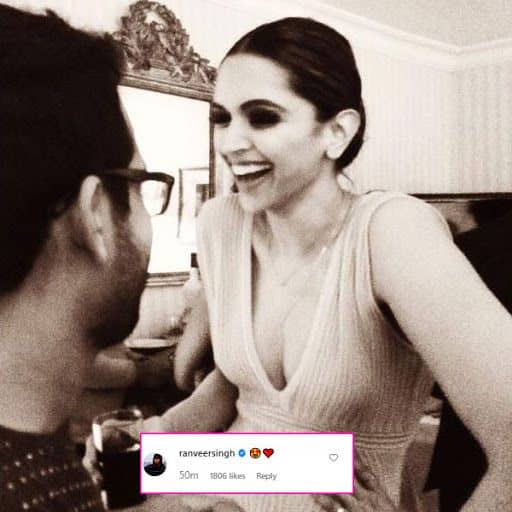 These two are such cuties! And well, this isn't the first time #DeepVeer has done this and something tells us, it won't be the last time either! Earlier, in an interview with Grazia India, the Gully Boy actor was asked about his retirement plans and he had said, "I’d like a sea-facing villa in Goa with a swimming pool where I can cook, paint, watch movies and do yoga. And I’d like to be surrounded by my many children."

Coming to their work front, the actress is busy shooting for Chhapaak in Delhi. She stars opposite Vikrant Massey in the film which is based on the life of acid attack survivor Laxmi Agarwal. Chhapaak is directed by Meghna Gulzar and releases on January 10, 2020.

As for Ranveer, he will be next seen in Kabir Khan's 83. The movie is based on the Indian cricket team's 1983 world cup win. The Gully Boy star was in Dharamsala recently training for his character and returned to Mumbai just recently.

The movie also features R Badree, Harrdy Sandhu, Chirag Patil, Saqib Saleem, Pankaj Tripathi, Tahir Bhasin, Ammy Virk and Saahil Khattar in key roles of cricketers. The sports drama goes on floors from May 15 and the first schedule of 100 days will be held in London and Scotland. It releases on April 10, 2020.

Apart from this project, Singh has Takht lined up.