Virat Kohli was honoured with the Rajiv Gandhi Khel Ratna Award and Ranveer Singh shared his reaction to it.

Congratulations are in the order as Virat Kohli received the Rajiv Gandhi Khel Ratna Award, from President of India Ram Nath Kovind. It is the country’s highest honour in the field of sports. While videos show his wife Anushka Sharma present at the venue cheering for the Indian cricket team captain, we are distracted by Ranveer Singh’s reaction to the moment. Kohli took to Instagram to share his special moment with fans and the Simmba actor dropped a comment assumingly to congratulate the sports star.

Howzzat! Real Kapil Dev ran into reel Kapil Dev aka Ranveer Singh and here's what they spoke about

Also Read - "Thanks my love", tweets Virat Kohli to his favourite cheerleader Anushka Sharma after winning the match!

Instead of dropping a phrase, Ranveer decided to drop an emoji to express his thoughts on the memorable moment. The actor used an emoji which features an arrow with the words “top” written underneath. So, what does it mean? Top game? Top notch? Heading top? Well only Ranveer can explain it. What do you think it means? Tweet to us @bollywood_life and let us know. Also Read - Virat Kohli scores a century and Anushka Sharma just can't get over 'what a guy' she married! 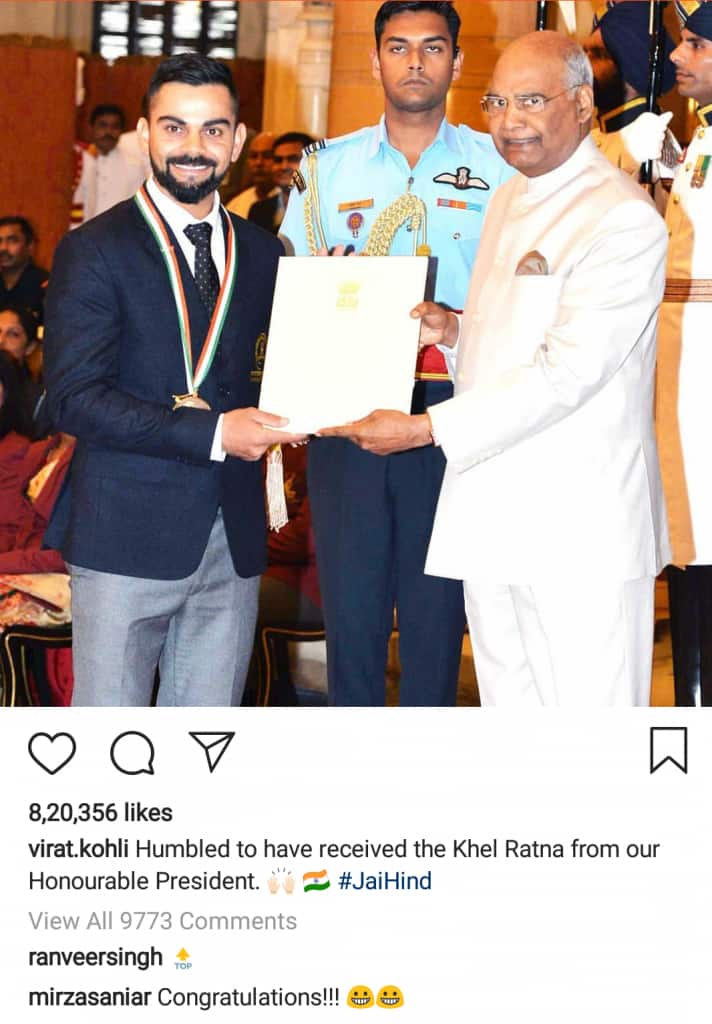 Meanwhile, Ranveer wasn’t the only one who took a moment and congratulated Kohli. Tennis star Sania Mirza too congratulated the star on his achievement. She was joined in by Kohli’s fellow team mate Suresh Raina on the congratulatory note.

Kohli becomes the third Indian cricketer who has been bestowed with the honour. He follows the footsteps of Sachin Tendulkar and Mahendra Singh Dhoni. Kohli received the honour in the presence of Anushka, his mother Saroj Kohli and brother Vikas Kohli. In the videos from the venue, Anushka is seen wearing a gorgeous saree and applauding her husband’s achievement with pride. The love birds have been painting New Delhi red lately as they have been spotted on dinner dates and spending time with family and friends frequently lately.