Rashmika Mandanna struggles to walk in 'highly uncomfortable' dress at Karan Johar's bash; netizens wonder, 'Why did she wear that?'

Rashmika Mandanna appeared very uncomfortable while walking inside the venue. She was constantly seen holding her dress and held an awkward smile on her face. 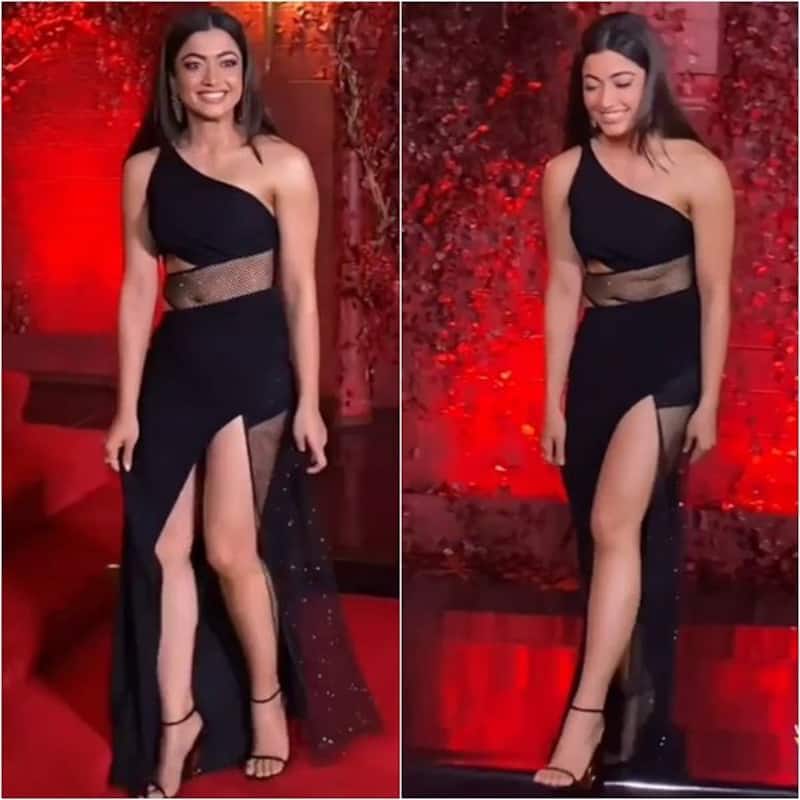 Karan Johar's 50th birthday celebration was indeed a star-studded event. A slew of Bollywood celebs came under one roof and mesmerised everyone with their stylish appearances. Pushpa star Rashmika Mandanna, who is all set to make her Hindi debut with Mission Majnu and Good Bye, was also a part of the grand celebration. However, the diva struggled to walk in highly uncomfortable dress which made netizens wonder why did she even wear that at the event. Also Read - Bigg Boss 16 and Bigg Boss OTT 2: Shivangi Joshi, Divyanka Tripathi, Munmun Dutta and more – 17 contestants approached for TV and web show

Rashmika wore a black one-shoulder body-hugging outfit with a bold thigh-high slit. She let her hair loose and wore minimal jewelry to enhance her appearance. There's no doubt that she looked stunning at the red carpet. However, she appeared very uncomfortable while walking inside the venue. She was constantly seen holding her dress and held an awkward smile on her face. Also Read - Koffee With Karan 7: Alia Bhatt shares deets about her 'suhagraat' with Ranbir Kapoor on Karan Johar's chat show [Watch Video]

Her awkwardness was caught on camera and it wasn't pleasant to the eye. Many people commented about how uncomfortable she was in that dress while her fans showered praises on her fabulous look. Also Read - Brahmastra: Alia Bhatt and Ranbir Kapoor will not promote the Ayan Mukerji film together; Here's why [Exclusive]

Rashmika has made a name for herself in both the Tamil and Telugu film industries. Her recent Telugu film Pushpa: The Rise has gone on to emerge a superhit. She was last seen in the movie Aadavallu Meeku Johaarlu alongside Sharwanand. Apart from a couple of big-ticket movies in Bollywood, Rashmika will be seen in the Pushpa sequel Pushpa: The Rule.
She has also bagged Arjun Reddy fame Sandeep Reddy Vanga's upcoming directorial Animal, which stars Ranbir Kapoor. She will next seen in Sita Ramam opposite Dulquer Salmaan and Mrunal Thakur. The movie will have a simultaneous release in Telugu, Tamil, Hindi, and Malayalam on August 5.