Rhea Chakraborty has put a picture where we can see her with Sushant Singh Rajput and some friends. It seems like she spent the special day with rumoured beau

Sushant Singh Rajput has been in the news since the start of 2019 whether it is for his films or personal life. If gossip mills are to be believed, then the actor is dating Mere Dad Ki Maruti and Jalebi actor Rhea Chakraborty. She has put a picture on her Instagram that has Sushant Singh Rajput and a couple of other people. She wrote that she had the happiest birthday. The Chhichhore actor had put a post on Friday where he wrote that he had to plan an important party. Rhea Chakraborty has not put up much stuff but we can see a video where she is cutting a cake with fireworks going off in the sky. If Sushant Singh Rajput indeed planned that bash, it looks like a swell affair. She shared a picture where the four posed somewhere on a hill with the clouds around them. Surely, it was all about monsoon magic. 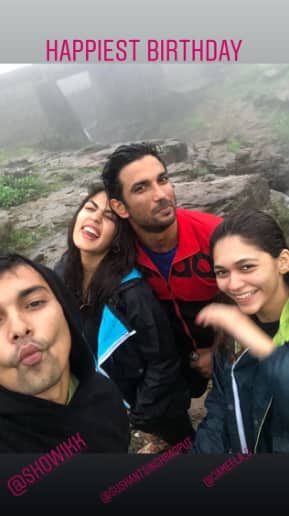 Rhea's brother and a friend are also present. It seems like they were at Sushant's Lonavala residence. He has a place close to Pawna Dam and it supposed to be truly beautiful. Also Read - Chehre movie review: The multiple faces of this Amitabh Bachchan-Emraan Hashmi starrer aren't interesting enough to hold your attention

Facts dont change, situations seldom do, a thought, however, could be changed, even, right now... #selfmusing In between eating too much last night :)), playing badminton right now to drop some weight for today's shoot :((, to thinking about planning an important party...Good morning ?❤✊??

Till mid-March, there were reports of how Sara Ali Khan and he were a clandestine couple. Stories of their 'midnight dates' went viral. However, Sushant stopped following Sara on Instagram in mid-March giving rise to speculations that everything was not okay between the Kedarnath co-stars. News of a patch-up also surfaced but what is notable is how they were never clicked together. People found it tough to believe that gossip. In May, news came out that he was dating Rhea Chakraborty. It seems he knew her since a while but the romance blossomed some time in March 2019. She also happens to be Sara Ali Khan's gym BFF. Well, Rhea was clicked outside his residence twice, which fueled the rumours in the first place. However, what made the buzz stronger were the pictures from Ladakh. Sushant's friends and Rhea travelled to the Himalayan destination.

An ounce of innocence, a pinch of laughter. #ladakh

In the mean time, the team of Chehre unveiled Rhea's look from the courtroom drama. Amitabh Bachchan, Emraan Hashmi, Kriti Kharbanda, Siddhanth Kapoor are her co-stars in the film.

Sushant will be seen next in Nitesh Tiwari's Chhichhore. The movie comes out on August 30. His last film Sonchiriya was a critical success but tanked at the box office. All eyes are now on Chhichhore!