Rihanna just released her new single, Work's video that also has Drake but somehow it resembles Nicki Minaj's Anaconda a lot and we reason out why!

The good girl has gone the Nicki way! Read on...

Ex lovers Rihanna and Drake are the epitome of sexiness in this video and yet I can't help but wonder what's with the twerking. Riri put all her fans in a tizzy after releasing the sneak peek of this video. Yeah. It had her twerking and grinding all over Drake. One thing that it made me want was the duo to get back together. if two exes can bring such a sizzling chemistry on screen then it's gotta be because maybe they still have that spark left! But yeah, this song is not about how their relationship but about how to sex things up. I'll first give you a brief of Rihanna's attire. So she's wearing this highly peek-a-boo mesh dress and you can totally see her bikini. Hot? Yaha! Also Read - Ragnarok movie review: This Norwegian Anaconda clone has its terrifying moments, but isn't terrifying enough on the whole

Next thing that happens in this club is that Rihanna starts dancing and singing and her dancing has mostly got to do with how well she can shake her butt. No no, that's not all, she's also got several other fellow companions who also like to move their behind with sass. Super cool. But then things seem to change a bit as Drake has made his entrance. Rihanna has got him hooked to her sexiness and the the grinding, of course. Things are starting to heat up in the club as most of them are resorting to Riri's way of seducing and it's working! So everybody got someone to take home and everybody's happy. Also Read - Nicki Minaj's show in Bangkok gets postponed due to technical issues

While I watched this video there were only two things alarmingly ringing in my head - sexy and anaconda?! Well, nobody can forget Nicki Minaj's a**holic song, Anaconda that shamed all the skinny girls? Nicki literally brought out her hatred for skinny girls in the form of this song and it worked in her favour for a lot of people found it bold, sexy and catchy while haters found it disgusting and demeaning. I found it rather stupid but I could deal with it. And now I just found a sequel to that song in Rihanna's Work! There's a lot of grinding, there's a lot of butt, there's one drake who is all about the butt! These pictures from the Anaconda soundtrack will refreshing your memory. 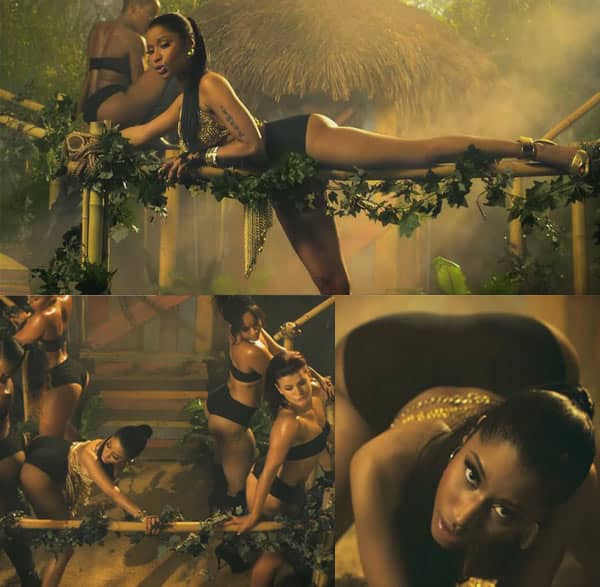 Did you see that? Now let's come back to Rihanna's most awaited song, Work. See any resemblance? I sure as hell see it so you folks watch the video attached below and tell me what you think about it in the comments section below!