The sudden demise of popular TV star, Sidharth Shukla has sent shockwaves across the nation. While we saw fans and many members of the fraternity expressing their grief on social media, Varun Dhawan and Alia Bhatt, who shared screen space with Sidharth Shukla in Humpty Sharma Ki Dulhania, paid tribute to the late star by sharing pics with him and writing beautiful things about his character. While Alia wrote, “Sid, one of the warmest, kindest and most genuine people I’ve worked with...always smiling and always positive! My heartfelt condolences to his family, loved ones and his fans who have loved him so deeply! Rest in peace!”, Varun Dhawan captioned the picture, "Rip brother u are loved by so many and u touched so many with ur kind heart and beautiful personality. Today heaven has gained a star and we have lost one. My deepest condolences to the family and loved ones." Sahid Vaid, who also played a key role in Humpty Sharma Ki Dulhania, shared an emotional note with a pic, which reads, The heart is broken and the shock is unbearable, you just started doing so well for yourself my friend, you had so much more to give rest in peace @realsidharthshukla." Also Read - When Ananya Panday, Janhvi Kapoor, Sara Ali Khan and more young Bollywood divas left fans gasping for breath with their fiery hot bikini shots – view pics 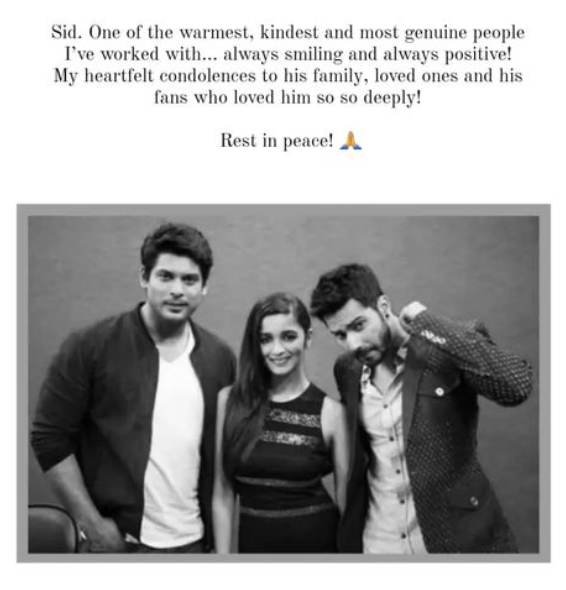 Humpty Sharma Ki Dulhania, which marked the Bollywood debut of Sidharth Shukla, was directed by Shashank Khaitan and produced by Karan Johar under his banner Dharma Productions. The film was a box office success, though later we didn't saw Sidharth in any of the Bollywood films. The actor was last seen in Ekta Kapoor's web-series Broken But Beautiful 3, which garnered positive reviews from fans with Sidharth's performance becoming the biggest highlight. Also Read - Kangana Ranaut labels Alia Bhatt's new ad replacing 'kanyadaan' to 'kanyamaan' as 'anti-Hindu propaganda'