La La Land has not only won hearts all over but has also been bagging awards at every awards ceremony, including last night's BAFTA. But probably it takes more than that to impress Rishi Kapoor. The actor is famous for his unfiltered posts on Twitter, and sometimes fans love him for that, and sometimes fans get hell bent on destroying him. And his latest tweet on La La Land has induced the latter reaction. Also Read - La La Land actress Emma Stone and husband Dave McCary welcome their 1st child

Rishi Kapoor decided to hate on just the most popular movie if 2016, and he took to Twitter make his opinion public. "Awards/BAFTA/Oscars. Hated the film which is nominated for maximum categories.Walked out after 30 mins of playtime.I have done enough.Uggghh" he wrote. And that was all that was required to invite the wrath of the La La Land lovers. Tweets started flooding his timeline, which were calling the actor out. And to be honest, I am not impressed. Rishi has had better haters and troll than that in the past. These people are hardly creative. I mean look at this one: Also Read - Happy Birthday Ryan Gosling: 8 films where the La La Land actor wowed us with his acting chops

And this one is not even trying!

This man belongs to a whole different dimension.

This one is quite brutal though... 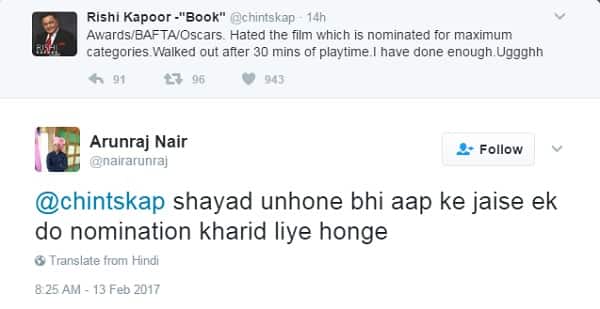 @chintskap big fan of you Mr Kapoor, but this tweet is particularly hillarious coming from the star of All is Well ?

As the hate began to grow, a lot of his followers and ardent fans came to his rescue. Many resonated the idea that La La Land was indeed overrated. Also, can I chip in that everyone is entitled to hate the movie of their choice! Here's some love for Chintu ji from his fans:

@chintskap it's not worth even for 30mnts.

Well, overrated or not, La La Land is scoring it big at the award shows. After winning at Golden Globes, the romantic musical has bagged 5 awards at the BAFTA 2017 out of it's 11 nominations, including Best Picture and Best Leading Actress.